As part of our Black History Month blog series, we are highlighting our upcoming British Pavilion artist, Sonia Boyce OBE RA, who will represent Great Britain at the 59th International Art Exhibition.

Sonia Boyce OBE RA came to prominence as a key figure in the burgeoning Black-British art scene of the early 1980s. She was one of the youngest artists of her generation to have her work acquired by Tate, featuring deeply personal reflections on race, class and gender in Britain. In 2016, Boyce was elected a Royal Academician, and in the same year received a Paul Hamlyn Artist Award. In 2019, she received an OBE for Services to Art in the Queen’s New Year Honours List, as well as an Honorary Doctorate from the Royal College of Art. Boyce is currently a Professor at University of the Arts London, where she holds the inaugural Chair in Black Art & Design.

Boyce is known for her highly innovative and experimental approach to art-making, using performance, drawing, print, photography, and audio-visual elements in her work. Since the 1990s, her practice has become increasingly improvisational and collaborative, inviting a broad cross-section of participants to come together and speak, sing or move in relation to the past and the present. At the heart of Boyce’s work is an empowering exploration of gestures and events, with an underlying focus on the personal and political subjectivities behind them. 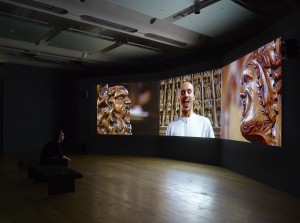