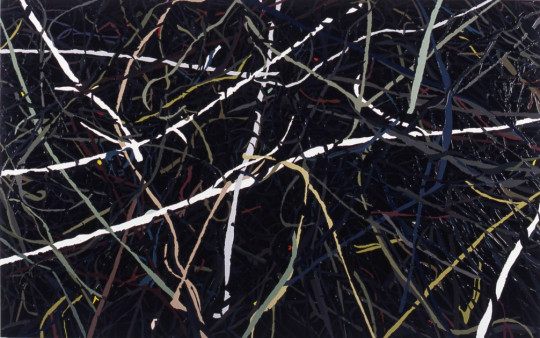 Clare Woods was born in Hampshire and studied at Bath College of Art and at Goldsmith’s College in London.

In an interview with Stephen Hepworth Woods described her work ‘The other day we were in Suffolk and were just driving along in broad daylight, and I took the wrong turning on the road and this road suddenly became a lane. It was someone’s drive, but it wasn’t really a drive it was a track. We were driving on to someone’s land. We passed an old truck and a burnt out car. It wasn’t exactly how you’d imagine an approach to a cottage covered in roses to be. We got to a really seedy looking bungalow, with all this trash outside and abandoned shopping trolleys and I couldn’t turn the car around. I had to drive onto their land to turn around and come back. It’s that contrast I’m interested in, where two extremes meet, when poles come together. Being in-between. Being scared and fascinated, enjoying the natural elements of the countryside and finding a burnt out car. My relationship is a fascination or love with both the beauty and the horror. I’m caught on the cusp. I need both. I’m at a point of emotional transition. I am interested in working out anxieties and fears, stupid fears, not big major fears, ones that you can’t really explain that just happen.

I grew up in the countryside and then came to London and was absolutely petrified. I thought every night, I was going to be murdered. I got used to it, although it still doesn’t feel terribly safe. But now when I go back to the countryside it just scares me. It’s probably more scary than London in a lot of ways. I suppose it’s all about what you can’t see, what you imagine to be behind the tree. This is enshrined in so many things that I am looking at: folk laws, tradition and pagan rituals that have become Christian festivals. Things that have developed like May Day and Halloween, both of which are linked to trees and natural environments. For me The Wicker Man (1973) is quite an important film which sums it up, where nature is barbaric and people think that it is fragile. It’s not. I think it’s quite arrogant that we think we can destroy nature. We can’t. Whatever happens it will adjust, it won’t ever be destroyed.

What I want is that point in a horror film where everything is fine, mum is cooking, dad comes in with the shopping, the children are outside in the yard playing and then one thing will happen. Something really small, nothing scary, and you realise all isn’t okay. It’s way before everyone runs around with blood all over them. It’s that little point of transition where something’s not quite right and an anxiety starts to colour a domestic situation. That’s what I want to get into the paintings. A point between something abstract that has lots of endless possibilities and something that is based in reality and has a set of rules. I’m trying to balance the way they are made and the subject matter to reach that point. The whole thing is very process led. First there’s a photograph, then a drawing from the photo, cutting masking tape and finally making the painting. Obviously things change in production.

They are made in reverse. It’s a back to front way of making a painting like enamelling; the lighter colours are done first working to dark, so by the time you get to the background, the lighter colours are quite jagged. It gives it that awkward feel, a line that looks like it should be an expression, has become disjointed. I got to the point when I was making paintings so perfectly that they were just dead. They became like graphic illustrations. So I stated moving back the other way, letting the materials actually do what they do. I used to work in lots of layers, building up the paint very thinly, and now I just work with one layer. Obviously the paintings have become a lot more complex. There are lots of thinner lines together. I’ve got thick background paint going in-between and things do, with the nature of the gloss, find there own level. There are no brush marks in it. You just pour it on and it’ll find its own level. It might go over a colour or stay by the side of another colour so I am quite happy to let that happen, although I still retain this feeling that it has been manipulated. I just don’t want there to be any expression. I used to paint on the sides of the paintings so they felt like they were objects, but now I have stopped. They feel like they are paintings now. The way I want them to work is that you need to walk around them in order to look at them, because they are so reflective. In this sense, maybe it’s how you would look at a sculpture, walking around it to see the whole thing.

Taking the photographs is a random thing, pointing in any direction: up into the trees down into a thicket. It brings out things that are not really there, which is great because that’s the whole point. Imagining what could have happened before and what may happen after the flash fades and the night takes it back. What you see is one point in time. The tangle of undergrowth, all brambles and lines, it’s all very much about the passing of time. A little like Sleeping Beauty. Asleep for a hundred years, while the castle is surrounded and choked full of thorns, still creeping and growing.

The colours are from lots of different sources: Art Nouveau pattern books, Victorian wallpaper murals, Hammer Horror movie books and of course the photographs themselves. Trying to reproduce natural colour with household gloss paint gives a chemical, synthetic look, which is great. Poisonous really, in a way. The paint gets quite congealed, it’s thick and engulfing and gloss paint also has a mind of its own. If it’s really hot outside you’ll get a ‘skinning’ effect, so underneath the paint will still be wet, and it will pull and ripple. It almost has the look of congealed blood. It’s awful when you touch it. It gets everywhere and the fumes are really quite gross. It’s perfect for the job though. It’s reflective and that’s what I want, a shiny surface, but really rough and broken up so as the light hits it you can see how the surface plays tricks. You can see the room reflected in the painting and as you come closer the room disappears and you see your own reflection. They pull you in, ensnaring you as you stare into them.