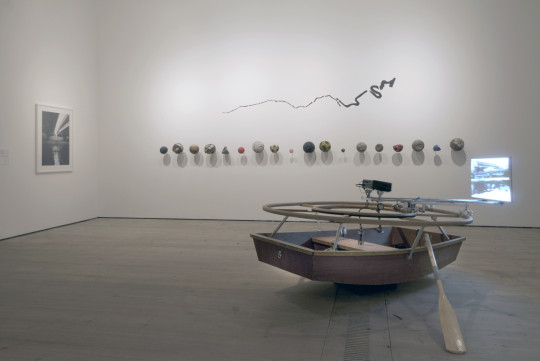 Shawcross' work is characterised by the design and building of machines, with the intention of exploring the laws of science and demonstrating the abstract nature of scientific thought in a practical manifestation, often workung with scientists to research and develop his ideas.

He was included in 2001’s New Contemporaries exhibition and came to prominence after being included in the 2004 New Blood exhibition at the Saatchi Gallery at County Hall, London. For this exhibition Shawcross presented The Nervous System, a large, symmetrical, working loom producing over 20,000 metres of double-helix coloured rope every week.

Shawcross' first public realm commission Space Trumpet, installed in the atrium of the refurbished Unilever Building in London in 2007, won the Art & Work 2008 Award for a Work of Art Commissioned for a Specific Site in a Working Environment, and in 2009 he was awarded the Illy prize for best solo presentation at Art Brussels. From 2009-2011 Shawcross was Artist in Residence at the Science Museum, London and, in 2012 Shawcross, along with Chris Ofili and Mark Wallinger, was invited to create works inspired by Titian's masterpieces for the projectMetamorphosis: Titian 2012, an ambitious collaboration with the National Gallery and Royal Ballet for the Cultural Olympiad.