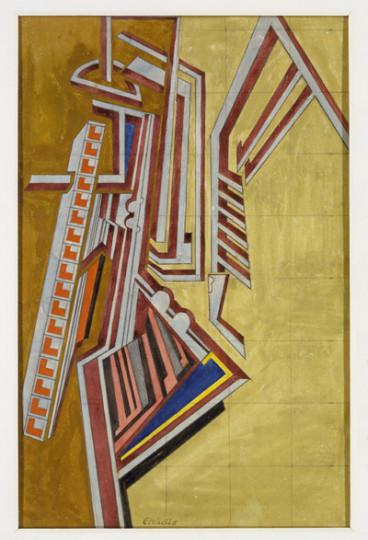 Frederick Etchells was an English artist and architect born in Newcastle Upon Tyne in 1886.
He received an early education at the London School of Kensington, now known as The Royal College of Art, which brought him into contact with the Bloomsbury Group. Through the artistic exponents of the group, including Clive Bell and Roger Fry, Etchells became a contributor to the Omega Workshops before breaking away to form the Rebel Arts Movement with Wyndham Lewis.
The Rebel Arts Centre, based in Great Ormand Street, London, was intended as a place in which artists and craftsmen could meet, work, and hold discussions, lectures, and classes. Lewis stated that it would be founded in the ‘principles underlying the movements in painting known as Cubist, Futurist and Expressionist'. These influences are prevalent in Etchells’ work.
A group exhibition featuring his work was held at the Allied Artists’ Association in June 1914 but while the group proceeded to be fraught with tensions, constantly changing identity, Etchells remained independent and even retained a relationship with Roger Fry.
Etchells’ art works belie an interest in the relationship between art and architecture and he later transferred his focus to architecture building several modernist inspired structures in London including, Crawford's Advertising Building, London (1929-30) and 38 Chapel Street, Westminster (1934). He is also renowned for translating Le Corbusier’s key texts Vers Une Architecture (1927) and Urbansime (1929) into English.
He later became a church and conservation architect and had a close association with John Betjeman who, at that time was a journalist with The Architectural Review.
Several examples of his works are held in the Tate Collection and the Composition from the British Council’s Collection, was featured in the exhibition Passports: Great Early Buys from the British Council Collection at the Whitechapel Gallery in early 2009, curated by the artist Michael Craig-Martin.
Etchells died in 1973 aged 87.