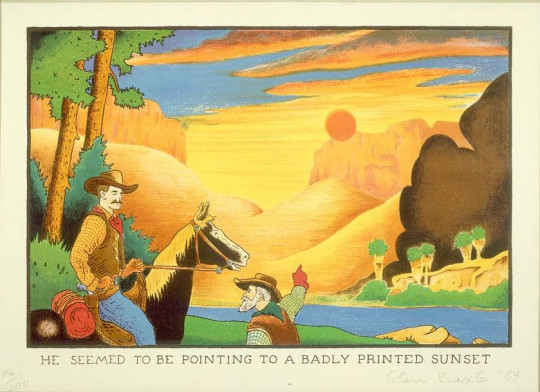 The artist Glen Baxter was born in Leeds in 1944. He trained at the Leeds College for Art and became popular for his surreal and absurd narrative drawings which have been widely exhibited and published in magazines including The New Yorker The Independent on Sunday and Vanity Fair.

His comic vignettes are presented in a style reminiscent of pulp fiction; classic, precise drawings - which depict seeming innocuous storybook images - are under-cut with witty captions that gently mock high culture and reveal a darker, cheekier side to the action.

Major exhibitions of Glen Baxter’s drawings and paintings have been held in New York, Paris, San Francisco, London, Munich, Tokyo and Sydney. In 1999 Baxter was commissioned by the French government to execute a tapestry. He has also worked on a series of etchings for the National Museum of Printmaking in Chatou, Paris. His work is in the collections of the Tate Gallery and V&A Museum in London and numerous museums and private collections around the world.