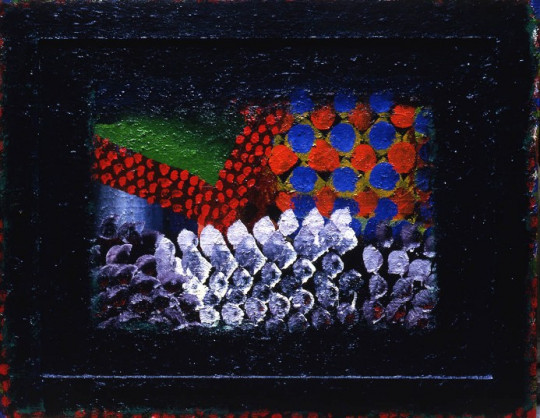 The British Pavilion was devoted to an exhibition of twenty paintings, concentrating on his work of the previous three years, and including a small selection of prints.

Howard Hodgkin was born in 1932 and from an early age decided to make painting his profession. His first mature painting, completed when he was seventeen, already embodies his lifelong concern to distil the experience of a remembered encounter in a specific interior space. At school, his art teachers, Wilfred Blunt and Charles Handley Read, introduced him to Indian painting, initiating an interest which has developed into a expert knowledge of the subject. The influences of Indian art, the colour and forms of the rural and urban landscape, has been strengthened by frequent visits to the sub-continent, and is evident obliquely or directly in many of his paintings and prints.

In 1949 Hodgkin spent a brief period at Camberwell School of Art, followed by four years at the Bath Academy of Art in Corsham (1950 - 54). During the late fifties and early sixties he taught at Charterhouse School and at Corsham and he still divides his time between homes in London and Wiltshire. His last teaching post was at Chelsea School of Art until 1970. During 1976-7 he wasArtist in Residence at Brasenose College, Oxford.

Hodgkin’s work was slow to be appreciated, offering no easy attachment to style or movement. The 1950s, the key decade of gestural painting, was for him a period of painful isolation. In the 1980s his paintings first gained notice, by association with the figurative painters of the Pop Art movement to which his work bore superficial resemblance, but it was not until the 1970s that the independent and exceptionally personal qualities of his painting were fully recognised.

Hodgkin’s paintings have may contradictory qualities; their subject matter is traditional and figurative, but the images are masked, disguised, even obliterated, by strokes and dabs of luxuriant paint, which assert the abstract autonomy of the picture surface. Relatively small in scale, Hodgkin’s paintings have qualities of restraint and concentration which distinguish them from works of the European 'new wave', but he shares with this new sensibility an intensely personal vision and passionate involvement with his subject.