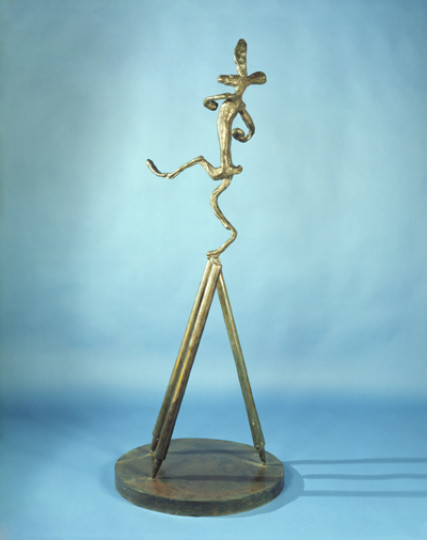 The exhibition studied in particular the works made in stone and bronze following Flanagan’s return to carving after he went to look at a stone in Pietrasanta in the Carra mountains, for a commission at Rawlins School in Quorn, Leicestershire in 1973. Seen within the sculptural tradition, Flanagan’s choice of stone for a public square could not be more natural, but in the context of his earlier work it is more surprising. In 1958, at Birmingham College of Art, he had studied modelling, casting and carving, but in the work he produced at St Martin’s School of Art and throughout the sixties he had set aside the conventional materials and methods of sculpture, not least the cut and welded steel of his contemporaries, choosing rather ‘to work direct in manageable materials, in a relatively inexpensive way’.

The 'soft' sculptures produced during this time employed canvas, hessian, plaster, sand, rope and wood; materials cut, poured, stacked, arranged and propped. Shapes arrived in a natural way, following the behaviour of his materials or using the traditional procedures of the building and construction trade, but rejecting both the geometrical rigour of Minimalism and the specialised ‘artistic’ skill of the carver or modeller.

His interest is in the evolving language of sculpture and he used materials he felt appropriate to a particular moment. His choice of stone and bronze in the atmosphere of the seventies may be seen in direct parallel to the modest materials and processes by which he chose to circumvent prevailing dogma and style in the sixties. Flanagan’s forms migrate from one medium to the next, transformed with each new interpretation, on paper, in clay, metal, stone or bronze.