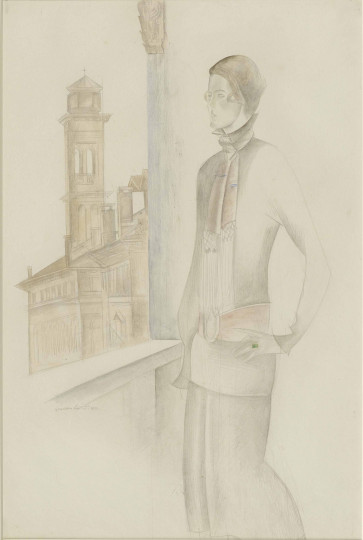 Acclaimed painter and writer, Wyndham Lewis is widely regarded as one of British Modernism's most controversial and influential figures. Founder of the groundbreaking Vorticist movement in 1914, Lewis was also a prolific portrait painter and this exhibition brings together oil paintings, drawings and works on paper, from 1910 to 1950. The works capture key figures from Lewis's life and represent a unique record of some of the greatest literary and artistic creators of the first half of the twentieth century.

Lewis conceived of personal identity not as an absolute essence, but as a series of possible performances and the exhibition features a number of self-portraits, including the striking Mr Wyndham Lewis as a Tyro, that illustrate the artist's complex and often contradictory public image.

The exhibition also provides an insight into Lewis's personal life and features several portraits of friends and lovers captured during intimate moments, including Iris Barry and his wife 'Froanna'.

Lewis's social and artistic circle included many of the leading personalities in the development and promotion of Modernism in Britain. Portraits of T.S. Eliot, Ezra Pound and James Joyce, the other 'Men of 1914', are brought together for the first time alongside other important artists and writers from the 1920s and 1930s such as Edith Sitwell, Rebecca West, Virginia Woolf and Stephen Spender.