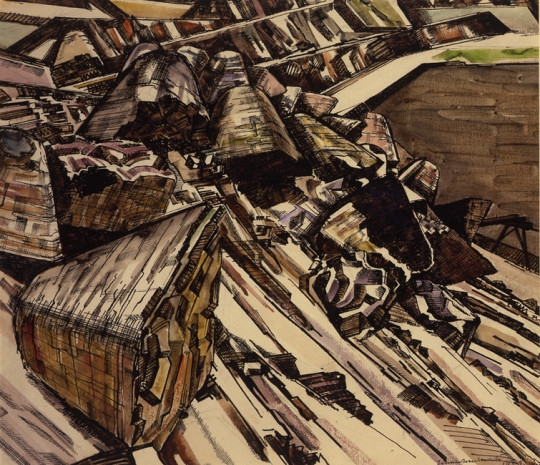 Edward Wadsworth was one of the most distinctive British artists of the first half of the twentieth century. After training briefly as an engineer he attended art school in Bradford and then the Slade in London. In 1914 he was, with Wyndham Lewis, one of the founding members of the Vorticist movement. Like other Vorticists, Wadsworth was inspired by industrialisation and technology and his abstract prints of this period have a dynamism which evokes the ‘machine age’.

After the first world war many artists rejected avant-gardism and began to re-appraise traditional artistic values. Wadsworth began to produce meticulously detailed landscapes and still-lifes and to work in the very traditional medium of egg tempera. But despite this historic technique his paintings continued to embody a Modernist sensibility. By the 1930s his reputation in Europe was considerable.

There is a strange intensity and an enigmatic quality to Wadsworth’s work from the 1920s onwards, reminiscent of the uncanny effects pursued by Surrealists such as René Magritte. But Wadsworth was not a Surrealist and his paintings depict real objects and landscapes, rather than images derived from the unconscious.

This display shows the breadth of Wadsworth’s work, from his early Vorticist woodcuts to his extraordinary marine compositions of the 1940s.