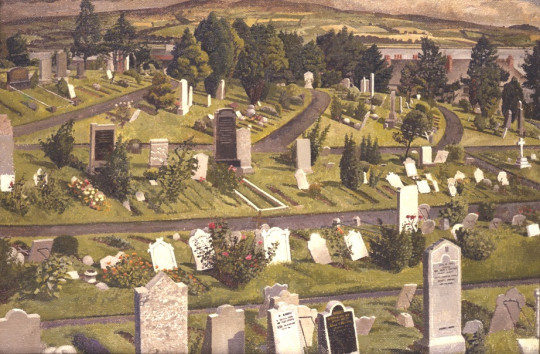 This was a survey exhibition of 65 paintings, the first major museum tour of works by Stanley Spencer to be shown in the USA. It opened at the Hirschhorn Museum and Sculpture Garden, Washington which in te 1980s had held important exhibitions of Lucian Freud and Francis Bacon. These exhibitions revealed to an American public the vitality and strength in the depiction of the human figure without parallel elsewhere. The exhibition began with works from 1914, after Spencer had left the Slade School of Art, and included significant early works such as Swan Upping ad The Centruion’s Servant(Tate collection www.tate.org.uk); works painted a result of Spencer’s experiences during both World Wars : Travoys with Wounded Soldiers arriving at a Dressing Station, Macedonia from 1919, and two paintings resulting from his commission to paint scenes from the shipyards on the Clyde during 1946. Other subjects with which Spencer was much associated were well represented, from his scenes of Cookham to still-lifes, portraits, self-portraits and his highly controversial nudes such as Double Nude Portrait. A fully illustrated catalogue was published by the British Council and the Yale University Press (ISBN 0 300 07426 5; 0 300 07337 2). The introduction was by the noted biographer Fiona MacCarthy and each painting was reproduced alongside Spencer’s own writing selected from the Spencer Archive by Dr Judith Collins.