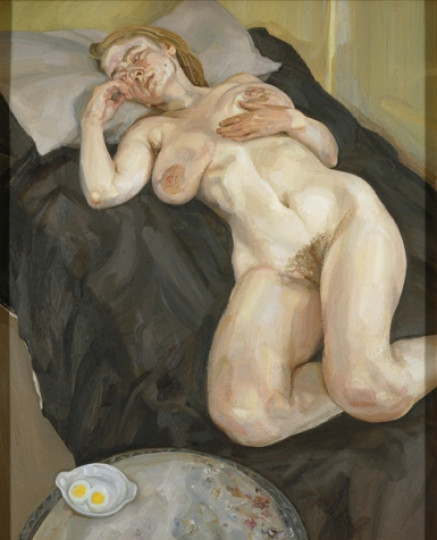 Presenting the work of three internationally acclaimed artists, the exhibition explores the nude and in particular how the depiction of skin continues to fascinate modern day practitioners.

Spencer Tunick’s hugely anticipated photographs from the Ferens Art Gallery’s ‘Sea of Hull’ 2016 commission are revealed for the first time. Officially the largest nude installation in the UK, and under the artist’s direction, over 3,200 participants from across the world painted their skin with blue body paint, dramatically transforming Hull’s urban landscape and reflecting  the city’s maritime history.

Art critics have already linked Tunick’s contemporary work with the French Impressionist painter, Edouard Manet and therefore it is particularly exciting that The Courtauld Gallery will lend their study for his masterpiece Le déjeuner sur l’herbe to the Ferens. This infamous painting of men in modern dress seated with a naked woman in a park scandalised 19th century audiences.  It has since acted as a reference point for much of the naked portraiture of the modern world, and sets the scene for the works in SKIN.

Ron Mueck’s striking, meticulously crafted sculptures of the human form, including The Wild Man (2005) Spooning Couple, (2005) and Ghost (1998) will be shown in partnership with ARTIST ROOMS On Tour. Mueck and Freud’s works reflect not only our fascination with surface, but the artists’ ability to convey powerful psychological depth and intensity through their work. Four of Freud’s intimate paintings on loan from national partners include the painting Two Men (1987-1988) Naked Girl with Egg (1980-1981), Small Naked Portrait (1973-1974) and Large Interior, London W9 (1973), which will also explore the relationship between the artist and the model.