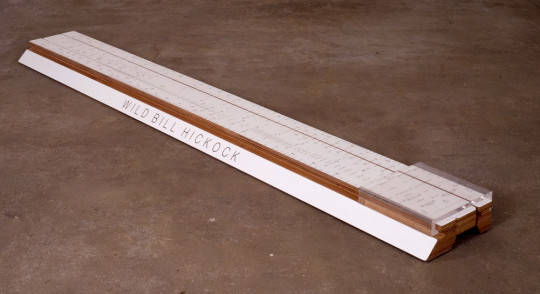 Simon Patterson is one of the most consistently interesting of the generation of London-based artists who came to prominence in the 1990s. His paintings, wall drawings, installations and, more recently, films, twist and manipulate familiar codes of representation and understanding, and have put him at the forefront of British contemporary art.

The exhibition presents new work in the light of the artist’s consistently-developing practice. Patterson’s use of systems of classification, documentation, description and belief, his hijacking of pre-existing maps, charts, lists and other methods for the transcription and communication of data begin with ‘name paintings’ (1987) and the wall drawing The Last Supper Arranged According to the Sweeper Formation (Jesus Christ in Goal) (1990). These early works are joined by General Assembly (1994), which links the language of politics and sport in an impressive installation, part-typewriter, part-stadium seating; and by the artist’s best known work The Great Bear (1992). This often-reproduced work is a facsimile of the London Underground map, with the names of the lines replaced by those of engineers, Louis’, philosophers, explorers, planets, journalists, footballers, musicians, film actors, saints, Italian artists, sinologues and comedians.

These works set the scene for three major new projects: a film made for the Sydney Biennial in 2002 and shown here for the first time since its premiere, a second film and a new wall drawing made specially for this exhibition. These works occupy the artist’s familiar territory of comparison and confrontation, using systems of orientation to disorientate and open up, rather than close down, possibilities for doubt.

This exhibition is one half of a temporally and spatially separated whole, the other half of which will be at Ikon Gallery, Birmingham from 8 June.