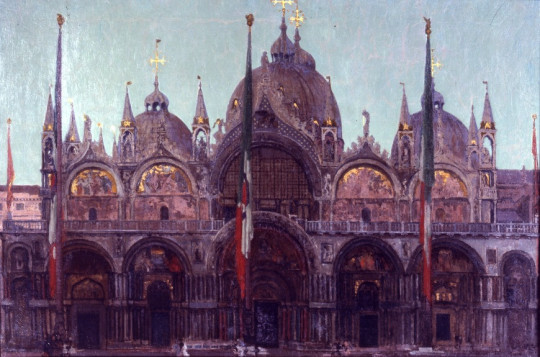 Walter Richard Sickert was one of the most important British artists of the late nineteenth and early twentieth centuries. Born in Germany and raised in England, he became known as the father of modern British art, having introduced Impressionism and Post-Impressionism to a younger generation of British painters.

Having trained under James McNeill Whistler, Sickert made repeated visits to Venice, starting in 1895; creating some of his most ravishing impressionist work. He painted many scenes of Venetian architecture including St Mark's Basilica (the cathedral of Venice) and the Rialto Bridge.

During subsequent visits Sickert moved the object of his attention first into alleyways, and then indoors and began experimenting with the concept of ambiguous figures in interiors, forcing the viewer to speculate on the nature of what they were looking at.

Through his pairing of female figures – the Venetian prostitutes, La Giuseppina and La Carolina, sometimes dressed, sometimes nude – Sickert discovered an approach to the subject that formed the basis of his art for his remaining career.

The exhibition is divided into a number of themes to demonstrate the range and development of Sickert’s Venetian: Views & Vistas, Nocturnes, and Portraits & Figures.

The exhibition is curated by Robert Upstone, Curator of Modern British Art at Tate Britain