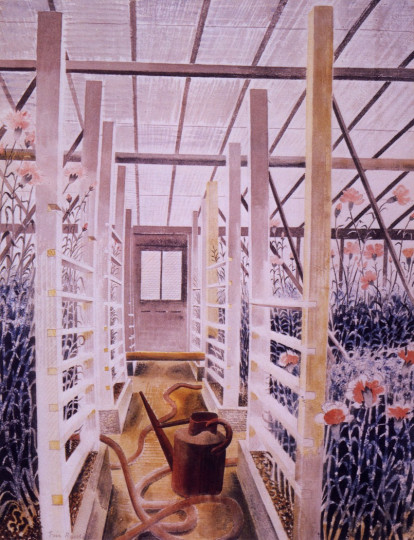 We are loaning a work from the British Council Collection by Eric Ravilious to Towner Art Gallery in Eastbourne, England, for their exhibition Ravilious & Co: The Pattern of Friendship.

Based on new research and telling a story that has never been told before, this exhibition of the artist and designer Eric Ravilious (1903-1942), coincides with the 75th anniversary of his death. It explores the significant relationships and working collaborations between Ravilious and an important group of friends and affiliates, including Paul and John Nash, Enid Marx, Barnett Freedman, Tirzah Garwood, Edward Bawden, Thomas Hennell, Douglas Percy Bliss, Peggy Angus, Helen Binyon, and Diana Low.

The exhibition will include many of Ravilious’ key works shown alongside both well-known and less seen works by his contemporaries, including work by each artist that has never before been exhibited publicly, and will focus chronologically on key moments when the work and careers of these artists coincided, overlapped or was particularly pertinent to the others, such as their time at the Royal College of Art, the 1927 St George’s exhibition, their time spent at Furlongs and Newhaven in Sussex, and their various roles in the Second World War.

The exhibition represent the wide range of media in which the artists worked, from watercolours to woodcuts, lithographic prints, book jackets and illustrations, patterned papers, and wallpaper and fabric design.