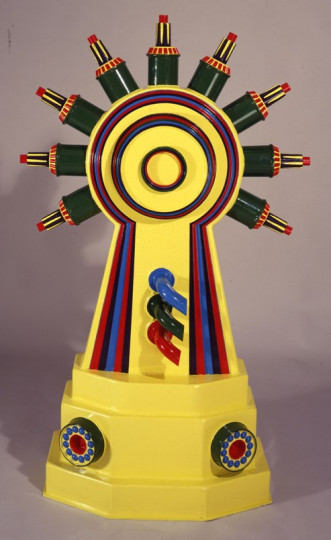 The most important exhibition ever organized in Italy on international Pop Art, entitled "Pop Art! 1956 - 1968", is due to open in Rome's Scuderie del Quirinale on 26 October. Organized by Walter Guadagnini, the exhibition comprising over 100 works by some 50 artists is designed to tell the story of the movements that made art history and culture in the second half of the 20th century in the four corners of the western world.

These artists used painting, sculpture, collage, combine painting, and even the banner so dear to American tradition to recount, interpret, illustrate, praise and criticize the consumer and mass media society, the rituals and legends of their time which can be seen more and more, with every passing day, to have foreshadowed our own. American and British, French, Italian, German and Spanish artists, superstars of the art scene and of today's auctions such as Andy Warhol, Roy Lichtenstein and Robert Rauschenberg; such legendary figures as Ray Johnson, Richard Hamilton and Peter Blake; artists famous in their own day who have since (and often unfairly) been consigned to oblivion; and centres like New York, London, Paris and Rome, but also "fringe areas" like Nice, Valencia and Dusseldorf: Pop Art is all of this and more. It is Marilyn repeated ad infinitum, it is Elvis Presley, the Beatles, the Rolling Stones, Brigitte Bardot and Virna Lisi, it is the Coca Cola and Esso logos, but it is also the assassination of JFK, or the astronaut as the contemporary embodiment of the Icarus myth. It is pin-ups ostentatiously showing off their bodies and their erotic charge, it is the 11 mt. long portrait of Sal Mineo in the nude, but it is also fragmented physiques, the anonymous faces of what a famous guru of the era called "one-dimensional man". Pop Art is all of this, and this is what the exhibition attempts to recapture. That is why it has been planned in a thematic rather than a chronological sequence, both to allow the visitor to rediscover the spirit of the years when the works of art were first conceived and, at the same time, to reflect 50 years on on a phenomenon that still has a great deal to tell us.

The exhibition is accompanied by a 300-page catalogue containing reproductions of all the works on display, each one with an explanatory note by Walter Guadagnini who also wrote the introductory text. It also contains individual contributions by Lorand Hegyi on the spread of Pop Art in Europe and, in particular, on Figuration Narrative; and by Daniela Lancioni on the historic 1964 Biennale in Venice, a crucial turning point in decreeing American Pop Art's success in Europe.