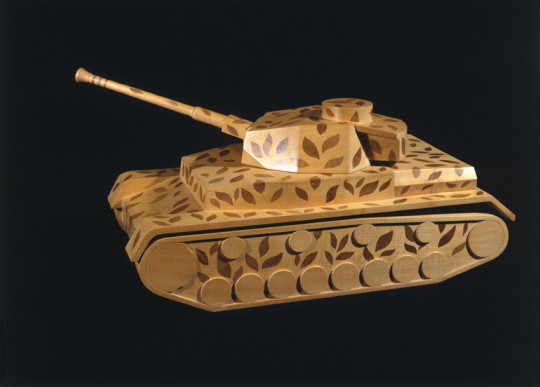 Not in the Corners is a group exhibition featuring film, sculpture, drawing, painting and print. This exhibition presents artworks that address the inseparability of the personal from the political, exploring the ground between the private act of artistic creation and its collective resonance in the public realm. Michelle Deignan presents new film Her Fanciful Digression (2012). The film’s narrative questions the supposed singularity of artists working within the Romantic tradition, placing emphasis upon relationships between painters and political thinkers. Her Fanciful Digression re-visits the shared, often multi-disciplinary form of collective creativity taking place at this time. Inlaid with leaves, Ian Hamilton Finlay’s Panzer MK IV: Homage to Poussin (1976) alludes to the poet and artist’s enduring interest in the complex, often contradictory relationship between nature and culture. The motif of the tank is used throughout Hamilton Finlay’s work, often seen in his gardens - sites viewed by the artist as provocative of poetic, philosophic and political thought.

Ruth Beale presents diptych Acid Utopia / An Epoch of Rest (2011). These are re-workings of a nineteenth century frontispiece and a date stamp page, from two library copies of William Morris’ 1890 book ‘News from Nowhere’. Rendered in psychedelic colours, Beale’s re-imagining of Morris’ tome alludes to moments of personal release and hallucination. Also referencing an intimate relationship to literature is Alexander & Susan Maris’ two panel work, Extracts from the TRUTH IN PAINTING (1990-1993 (revised 2006)). One canvas has been painted with a mix of acrylic medium and book ash from an unread volume of Jacques

Derrida’s ‘The Truth in Painting’. The second is similarly painted, yet using the ash of a read volume. The solipsistic artistic confessions of Annika Ström resonate beyond their seemingly personal parameters. Avoiding parody and direct critique, their homely appeal engages a shared response by evoking moments of private empathy.

London-based curators Matt Carter & Rosalie Doubal have worked together for the past five years. Alongside programming Edinburghproject space Sierra Metro with Janine Matheson since 2009, they have worked individually and collaboratively on projects throughout the UK. carterdoubal@gmail.com.