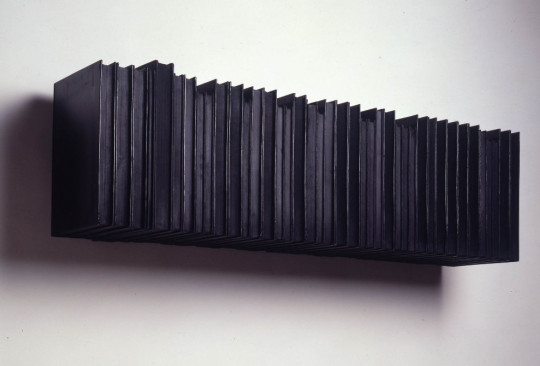 Meadow Arts is curating an exhibition by leading artists on the book in art at Richard Booth's iconic secondhand bookshop, opening for the launch of this year's Festival.

Many influential artists have made work that uses the book as an object, questioning its function and form, often rendering it unreadable; what is a book that can't be read?

The works in this exhibition range from the poignant to the celebratory. Harland Miller's playful re-mastering of the classic Penguin cover offers a Pop Art, sardonic and sometimes nostalgic take on literary themes, as does Michael Craig-Martin's deceptively simple 'Untitled (book)', which succinctly embodies the universal understanding of book-ness. Four vitrines by Anselm Kiefer reference the history of ideas, recalling Archimedes' discoveries with geometry. Jonathan Callan bends, cuts and wraps books so they become sculptural forms; here he creates an enthralling site specific reimagining of his large installation, Idiot Compression. Rachel Whiteread is a master in the art of showing the reverse, the ghost of objects large and small. Here a row of black books glow mysteriously, like shadows on a black shelf.

Curator Anne de Charmant says 'For me it is a great testament to the continued power of the printed, versus the digital, word, that so many artists still see the book as an incredibly potent symbol, not just to be revered, but questioned and endlessly explored. This exhibition is an eye- opener from that point of view.'