RECOLLECTION OF A MOMENT IN OCTOBER 1989 - THE TOBASNICH BURN, GLENARTNEY 1992 Michael Andrews (1928 – 1995) © The Estate of Michael Andrews, Courtesy of James Hyman Gallery, London 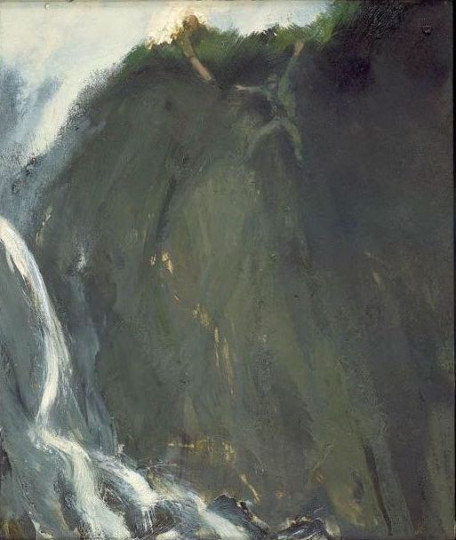 This exhibition provides the first opportunity to survey the entire career of Michael Andrews (1928 - 95). A notoriously slow and painstaking painter, during his lifetime Andrews had few solo exhibitions and, indeed, his oeuvre is relatively small. Nevertheless, he is rightly regarded as one of Britain's leading post-war painters.

Andrews is often linked with other artists of the so-called School of London, notably Francis Bacon, Frank Auerbach, Lucian Freud and Leon Kossoff. In common with these artists, Andrews's art demonstrates a preoccupation with the depiction of the human figure and also, like some of them, a deep involvement with the subject of landscape. From the beginning of his career in the early 1950s, Andrews's work was characterised by intensity of observation and exacting technical virtuosity. He described painting as 'the most marvellous, elaborate way of making up my mind'.

It was his firm conviction that some sense of the world and our place within it can be formed from reflecting on human nature. For that reason, his abiding subjects are people: the rich diversity of human behaviour and the complex relationships that exist between individuals and places. Even when people are not physically present in his work - as in his paintings of balloons, fish and certain landscapes - his images are redolent with human significance.

For Andrews, the activity of painting was a way of asking questions about 'the nature of being' and it contained the potential for sharing whatever insights were gained. Towards the end of his career he observed: 'In painting, through a process of definition, I realise how I am disposed - it is reassuring to know. As none of us are so different we can share this realisation. . . hence strange consolation'.