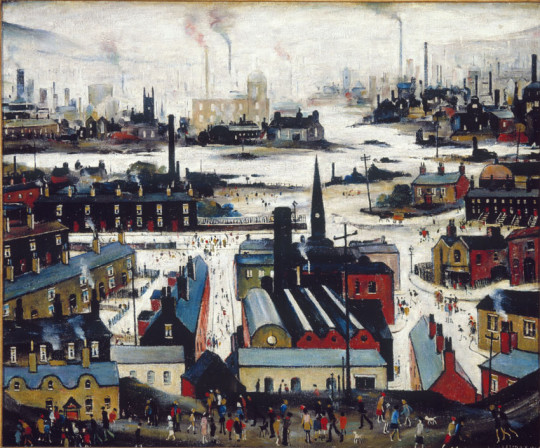 This summer, Tate Britain presents a major exhibition of landscapes by the much-loved British painter L.S. Lowry – the first of its kind held by a public institution in London since the artist’s death.

Focusing on the best of Lowry’s urban scenes and industrial landscapes including Tate’s Coming Out of School 1927 and The Pond 1950 alongside significant loans, this timely and carefully selected exhibition aims to re-assess Lowry’s contribution to art history and to argue for his achievement as Britain’s pre-eminent painter of the industrial city.

Lowry and the Painting of Modern Life demonstrates Lowry’s connections and debts to French painting of the later 19th century and its determination to make art out of the realities of the emerging modern city. It reveals what Lowry learned from the strange symbolist townscapes of his French born teacher Adolphe Valette and demonstrate important parallels with the painters of modern life Vincent van Gogh, Camille Pissarro, Georges Seurat and Maurice Utrillo, drawing upon these artists’s continuous search for ways to depict the unlovely facts of the city’s edges and the landscape made by industrialisation.

For Lowry modern painting needed to represent the remaining rituals of public life: football matches and protest marches, evictions and fist-fights, workers going to and from the mill. Without his pictures, Britain would arguably lack an account in paint of the experiences of the 20th-century working class. Lowry and the Painting of Modern Life reveals how Lowry developed his structure of the city based on his personal relationship to social space. Works such as Pit Tragedy1919 (The Lowry, Salford); An Accident 1926 (Manchester Art Gallery) and The Fever Van 1935 (Walker Art Gallery, Liverpool) demonstrate Lowry’s unique engagement with street life and his development of a cast of characters portraying the ways in which his subjects’ lives unfold and become unstuck, highlighting the unpredictability and unsteadiness of working-class life.

As a modern painter Lowry wished to show what the industrial revolution had made of the world, yet his dominant status in British art coincided with a disappearance of the industrialised world he engaged with. The exhibition’s final room presents for the first time all eight of his less well known, late industrial panoramas, where a leap up to ‘history painting’ size indicates the measure of his final ambition. These large panoramic landscapes fall into two groups: the first, from the 1950s, are titled, with intentional generality, Industrial Landscapes. The second, less well known group was painted in the 1960s in the mining valleys of South Wales, the heartland of the Labour movement. In both the tone is valedictory.