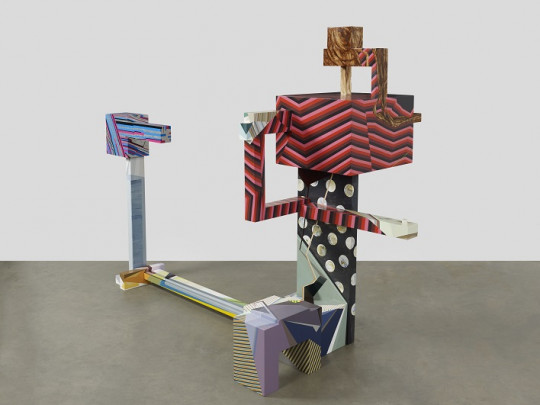 The movement Memphis founded by the Milanese Ettore Sottsass in 1981 overturned the rigid style and cool aura of the industrial design of that time. In previous decades the fascination with sober forms, beyond reference to the human being, was predominant. Memphis, in turn, marked the culmination of a development that had emancipated itself from the traditional International Style of Modernism since the 1970s, establishing a new radical and provocative aesthetics. Colorful designs featuring decorative elements aimed at uncoupling design from its functional character and industrial standardization in order to extend the scope for the individual expression of designers. Aesthetic categories like quotation, a dissecting view onto history and the practice of blending diverse cultural traditions revealed a new understanding of authorship – resembling a pool of multiple influences. Employing methods of assemblage or the simulation of materiality, and an emphasis on everyday life and unconventional materials as a creative reservoir underline the proximity of Memphis to art.

The exhibition in KAI 10 links the creative universe of Memphis to works of contemporary art. The aim is to examineMemphis’ role as a creative counterfort and a basis for artistic thinking, highlighting its relevance for visual artists until today. Theoretically reinforced by the ideas of Postmodernism, Memphis developed design into a reference-bound play of signs and symbols. This is echoed in the work of the artists in this show who also put a great emphasize on creating illusionistic surfaces that transcend the materiality and form of the objects and images.

The range of topics and motifs of the artists invited for the exhibition corresponds with the creative vocabulary ofMemphis. The artistic works include, for example, photographs which transform architecture into a dramatically charged composition of light and shade and other visual effects (Barbara Kasten). In addition, minimalistic spatial bodies with lavishly decorated surfaces (Graham Little) are being presented. In a similar way, artist Eva Berendes is interested in the aesthetic vocabulary of everyday objects and uses the everyday surface designs as touchstones for her own installative works. In paintings of subjective fictional spaces, allusions to debates on public space and the building culture of our present times (Raymond Barion) are prevalent. These are placed next to objects which just as well could have been conceived by an industrial designer and which allow new forms of usage but also an aesthetic reception of everyday things (Tobias Rehberger).