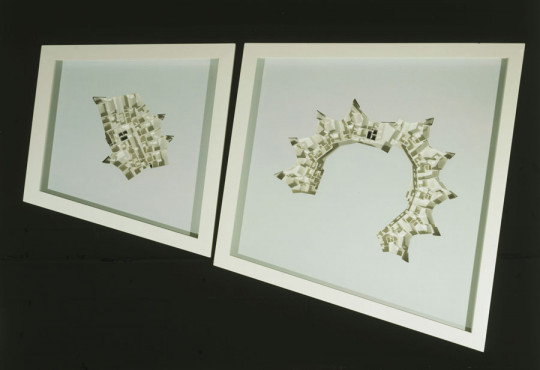 This exhibition will be the first major survey of collaborative works by British artists Ben Langlands and Nikki Bell. Concerned essentially with the nature of architecture, their wall mounted reliefs and ‘furniture’ pieces examine the means by which built environments at once reflect and determine human behaviour. Characterised by a formal economy, their various representations of architectural spaces are always elegant, as well as conceptually uncompromising.

Langlands & Bell’s reliefs resemble slices through architectural models. They depict buildings which exist, or have existed, presenting them as miniaturised and idealised forms. The works are based on architectural genres that epitomise the socio-political basis of contemporary culture. For example, corporate, ecclesiastical, international and prison buildings (respectively Rank Xerox, Dusseldorf; The Mosque of al-Hakim, Cairo; The European Parliament, Strasbourg; German Psychiatric Prison, Vienna; Millbank Penitentiary, London - which was sited where the Tate Gallery now stands) are places where power is concentrated and provide the artist with a rich source of subject matter. Often in the centre of these works we find meeting rooms, board rooms, altars or surveillance points – places where occupants are examined and their destinies determined.

Langlands & Bell take their place in a tradition which runs across the entire century, from Mondrian to minimalism, by way of De Stijl, the Bauhaus and Abstract Expressionism. The choice of three primrary colours in Adjoining Rooms (1989) certainly recalls Mondrian and the tradition of the monochrome, but perhaps even more, it can evoke the Barnett Newman Who’s afraid of red, yellow and blue? With a stylistic vocabulary derived from geometric abstraction, they accord an essential role to figurative art, and seek to examine the long project of modernism. Architecture that was drawn from the aesthetics of Mondrian or Malevich has lost, at the end of the century, its original innocence. If we are now suspicious of beauty, clarity, stillness, modernism, it is because its spiritual longing not to enlightenment, but frustration.

With the work of Langlands and Bell modernism has been made minimal, encased, refined. The structures of empty organisations – ground plans of not one system, but the failure of all empty systems – are presented with a meticulousness and formal rigour. The framing cases, which are also the pieces themselves – one more surrounding matrix of control, a white cube within the ultimate white cube of the gallery or museum – indicate the larger geography of power which contains us all.

A catalogue, with an essay by Germano Celant and an interview with the artists by Hans-Michael Herzog, was published by the Serpentine Gallery. ISBN 1 870814 96 7. A pamphlet with the Herzog interview was published by Cantieri Culturali alla Zisa (Italian only) No ISBN.