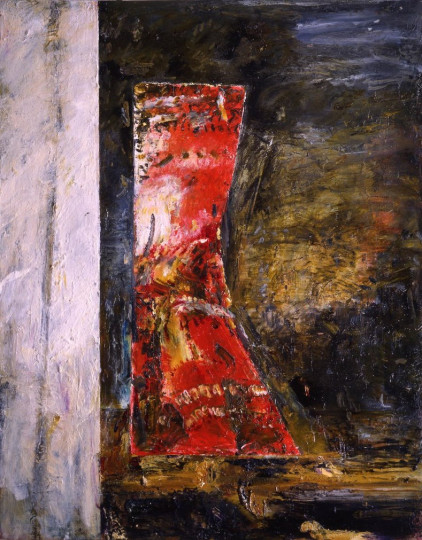 This summer The Dock presents ‘John Walker: Painter’, a major exhibition of the artist’s work in Ireland. John Walker (b. Birmingham, 1939) is a monumental figure in contemporary painting: a ‘painter’s painter’; an artist whose work has been as daring in its innovation as it has in its incorporation of the history of painting Walker is a figure represented in major collections throughout the world, a highly regarded and influential teacher and a painter whose work embraces Australian, European and North American influences. Though John Walker was born in Birmingham and was associated with British art early in his career (he represented the UK at the Venice Biennale in 1972), he left for New York in the early 70s, where his work was warmly received by the New York critics. Walker then moved on to Australia, where he became Dean of the School of Art, Victoria College in Melbourne and where he was deeply influenced by Aboriginal and Australian art and culture. Walker now divides his time between Boston, where he is Director of Graduate Painting at Boston University and Maine, where he paints outdoors in the rugged coastal landscape. We hope that artists and art lovers from all over Ireland and further afield will make the trip to Carrick-on-Shannon this summer and take advantage of this rare opportunity to view John Walker: Painter.

John Walker was born in Birmingham, England in 1939 and studied art at Birmingham School of Art and Acadamié de la Grand Chaumière, Paris. His work is held in many public collections worldwide including The Australian National Gallery, Canberra; The Metropolitan Museum of Art, The Guggenheim Museum, and the Museum of Modern Art, New York; The Tate Gallery, The British Museum, and The Victoria & Albert Museum, London. John Walker is represented by Knoedler Gallery in New York and Nielsen Gallery, Boston