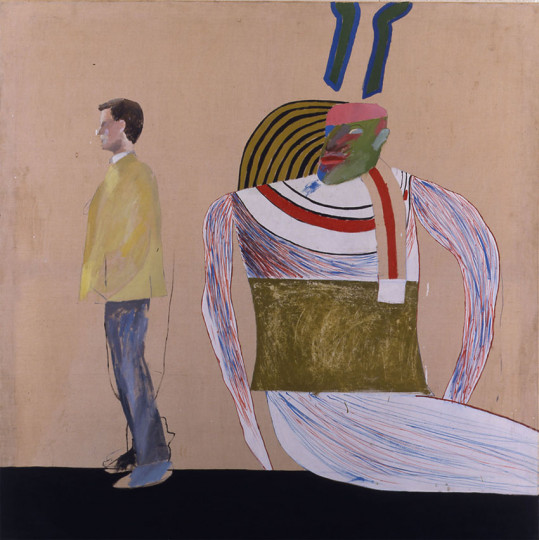 David Hockney’s designs for the stage will be on show at the Arts Council’s Hayward Gallery in London from 1 August to 29 September. This will be the only European showing of the exhibition Hockney Paints the Stage, which has been attracting large and enthusiastic audiences during a tour which included Chicago, Sam Francisco, Mexico City, Toronto and Minneapolis, where the exhibition was organised.

Few artists this century have made such a brilliant contribution to another medium as David Hockney has to the theatre. The exhibition covers all his work for the stage, beginning with his sets and costumes for the Royal Court’s production of Ubu Roi in 1966. This is followed by his designs for Stravinsky’s The Rake’s Progress in 1975 and Mozart’s The Magic Flute in 1978, both at Glynebourne.

The largest part of the exhibition is concerned with his most ambitious theatre project, the two triple bills for New York‘s Metropolitan Opera House in 1981; the first of these include Satie’s Parade, Poulenc’s Les Mamelles de Tirèsias and Ravel’s L’Enfant et les Sortilèges; the second, in the same year, consisted of three works by Stravinsky, Le Sacred u Printemps, Les Rossignol and Oedipus Rex.

The exhibition came about through a unique collaboration between the artist and Martin Friedman, Director of the Walker Art Center in Minneapolis. Together they have a created a theatre exhibition which is unlike any other. Hockney himself has designed and painted seven gallery-scale models of the Glynebourne and Metropolitan productions specially for the exhibition. These are huge three-dimensional paintings, complete with lighting and sound, and populated with Hockney’s first sculptures representing the characters in the operas and ballets.

A catalogue with an illustrated account by Martin Friedman, Director of the Walker Art Center, of the making of the exhibition and contributions by Stephen Spender, John Cox, John Dexter and Hockney himself, was published by Abbeville Press for the Walker Art Center. ISBN 0 89659 396 7 (hardback) ISBN 0 89659 397 5 (paperback). A revised version was published by Thames and Hudson for the Hayward showing.