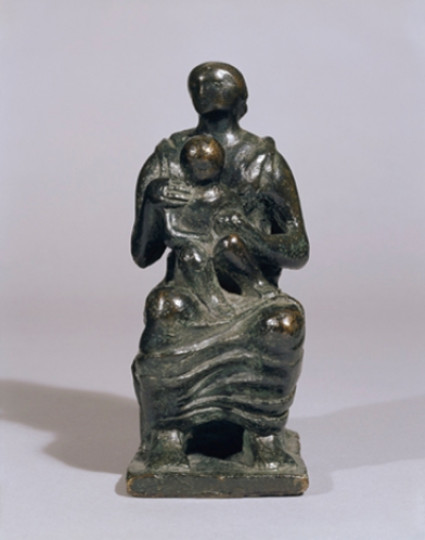 To mark the twentieth anniversary of Henry Moore’s death, Imperial War Museum London is hosting Henry Moore: War and Utility, a major retrospective exhibition that comprises over 160 works produced between 1938 and 1954 that demonstrate the richness and fertility of Moore’s artistic practice during this period.

In this exhibition the humanity of Moore’s work, displayed in some of his most affecting pieces, reveals the profound influence of the Spanish Civil War, the Second World War and the austere post-war decade on his work. This is the first major showing of Moore’s sculpture at Imperial War Museum London and included alongside key sculptures are maquettes, stringed pieces, studies, lithographs, textiles and the poignant shelter drawings that brought Moore fame as a war artist in the early 1940s.

Originally developed by the Henry Moore Foundation, this exhibition draws on their extensive collections and is augmented with important work from national and regional museums and galleries, including the British Museum and Tate as well as private collections.

The setting of the atrium of Imperial War Museum London, filled with the technology of war, provides a dramatic context and counterpoint to Moore’s artistic and humanitarian concerns. Sculptures such as Upright Internal External Form explore the encroaching and smothering influence of technology and the Warrior pieces honour the sacrifice of combatants. The dignified forms of the Family Groups, first seen sitting amidst the destruction of the blitz, are resolute against the surrounding machines of chaos and fear.

Moore’s sculptural practice in the 1930s pushed the structural possibilities of materials to new limits. The punctured female forms and stringed works such as Stringed Bowl evolved from historical and natural studies. By the late 1930s Moore’s techniques had expanded beyond carving to include the use of small maquettes as studies or models for larger works, and casting in a variety of materials. As a result of his wartime commissions, more obviously figurative work emerged, such as the Madonna and Child, represented within the exhibition by one of the study pieces, and in the family groups and warrior pieces, such as Warrior with Shield

Moore was a supporter of Republican Spain and in 1939 he created Spanish Prisoner, his first lithograph, to raise money for Spanish refugees held in detention camps in France. The confinement of this figure within a series of external elements was an important developing strand in Moore’s practice that was expressed in the contemporary sculptural enclosed form, The Helmet, also on display.

Drawing, always important to Moore’s work, took on a new significance during the early years of the Second World War, no longer simply serving as a precursor to sculpture but now figurative and standing in its own right. In 1939 Moore’s Hampstead studio was bombed; access to his cottage at Burcroft in Kent became difficult and until 1942 he was unable to produce any three dimensional works for the only time in his career. Instead, he began to sketch the devastation caused by bombing above ground as well as producing some of his most powerful and moving drawings of Londoners sheltering from the blitz underneath the city.

In 1940, under the chairmanship of Sir Kenneth Clark, the War Artists’ Advisory Committee purchased 16 drawings. 70 pages from the two Shelter Sketchbooks and a selection of the finished Shelter Drawings will be on display in the exhibition.

In the summer of 1942 Moore returned to his Yorkshire birthplace, Castleford, to draw miners at work, again commissioned by the War Artists’ Advisory Committee. Like the Shelter Drawings, these sketches were an important catalyst that encouraged both drapery and the male figure to appear in his post-war sculpture.

In the final part of the exhibition, Moore’s responses to austerity can be seen in a selection of colourful printed textile designs, commissioned by Zika and Lida Ascher to revitalise the headscarf at the end of the war and in the vibrant lithographs of this period such as Sculptural Objects. The liberation and reconstruction of public spaces were celebrated in major commissions, such as the Harlow Family Group, the Festival of Britain Reclining Figure commission and the later, iconic, King and Queen.