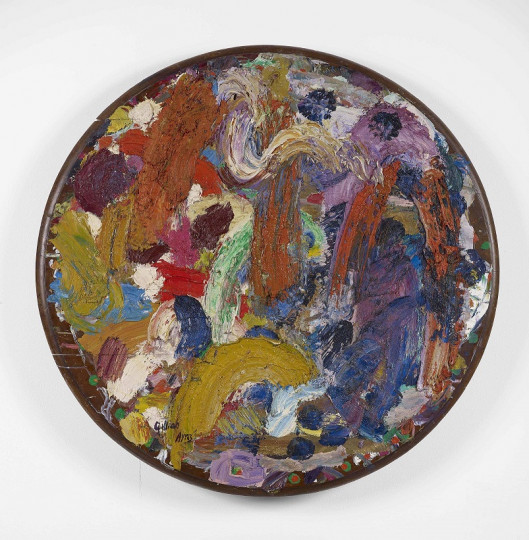 This major exhibition celebrates the bold and colourful work of one of Britain’s most important and internationally renowned abstract artists. Featuring major paintings from across the artist’s career, this is the largest exhibition of Ayres’s work ever seen in the UK.

In the 1950s, Ayres was a pioneer of abstract painting, making work on a vast scale. She explored colour and space by pouring, dripping and staining paint onto the canvas. She was a leading figure in a generation of British artists who were responding to the latest international developments in Paris and New York, including the work of American Abstract Expressionists.

This exhibition presents a unique opportunity to see Ayres’s greatest works from the 1950s to the 1980s. It features loans from major public collections installed alongside rarely seen paintings from the artist’s own collection. Across this period Ayres was a regular visitor to Wales and her experience of the mountains of Wales had a powerful influence on her expression of the ‘abstract sublime’. This connection to Wales was strengthened when Ayres lived and worked on the Llŷn Peninsula between 1981 and 1987. This period coincided with a particularly productive phase in her career which will be explored in this exhibition.

Gillian Ayres was born in 1930 and studied at Camberwell College of Art 1946-50. Her work featured in many of the landmark group shows of the 1960s including Situation1960. Major solo shows have followed, including the Museum of Modern Art, Oxford 1981, the Serpentine 1983, the Tate 1995 and the Royal Academy 1997. Ayres was awarded an OBE in 1986 and was made a Royal Academician in 1991