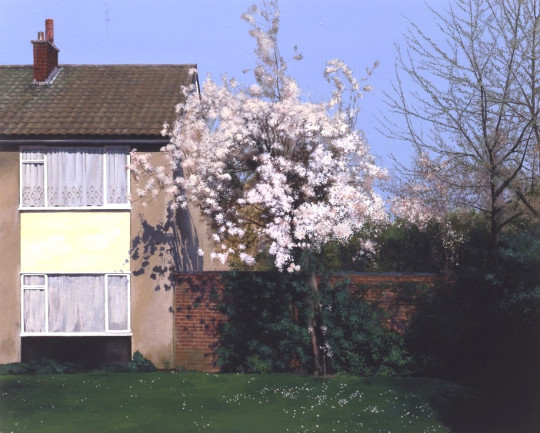 Turner Prize nominee George Shaw (born 1966) is one of Britain’s leading contemporary painters. His work has long attracted critical scrutiny and acclaim, and has been on view in high-profile solo exhibitions in the United Kingdom. Organized in collaboration with the Paul Mellon Centre for Studies in British Art in London, George Shaw: A Corner of a Foreign Field will be the artist’s first solo show in the United States.

Spanning three decades of Shaw’s prolific artistic practice, the exhibition will feature nearly seventy paintings, more than sixty drawings, numerous prints, and a range of sketchbook and notebook materials, as well as several new works. Shaw is celebrated for his paintings depicting the postwar Tile Hill council estate, where he spent his childhood. His work focuses relentlessly, even obsessively, on the Midlands—the region of England anchored by the cities of Birmingham, Derby, and Coventry.

Steeped in modern and historic fine art traditions, Shaw’s work alludes equally to twentieth-century painting and photography, as well as historic masters of European painting such as Titian (1490–1576), whose paintings of Diana and Acteon directly influenced The Rude Screen (2015–16), a work Shaw exhibited at the National Gallery, London, in 2016. He is also recognized for paintings such as This Sporting Life (2009), which testify to his ability to capture the melancholy and poignant aspects of modern British culture.