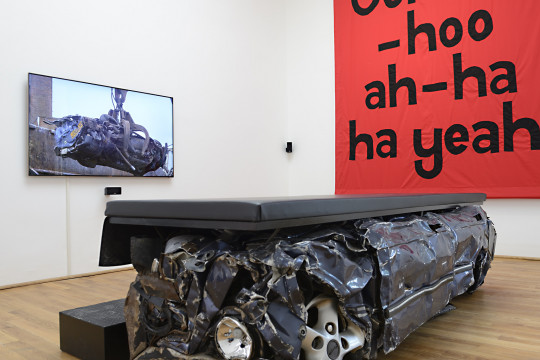 English Magic, a new exhibition by Jeremy Deller was conceived and created for the British Pavilion at the 55th International Art Exhibition – la Biennale di Venezia.

The exhibition reflects the roots of much of Deller’s work, focusing on British society - its people, icons, myths, folklore and its cultural and political history. He weaves together high and low, popular and rarefied to create unique and thought provoking work.

English Magic addresses events from the past, present and an imagined future. Deller frames these instances in a way that is contemporary but also true to the original subject, weaving a narrative that is almost psychedelic; hovering delicately between fact and fiction, real and imagined.

English Magic - a new film work by Jeremy Deller - forms a major part of his exhibition for the British Pavilion in 2013. The film brings together many of the ideas behind the works in the Pavilion, featuring visual and thematic elements that reflect Deller's interest in the diverse nature of British society and its broad cultural, socio-political and economic history. The music is performed by the Melodians Steel Orchestra from South London and was recorded in Studio 2 of Abbey Road Studios in London.

On Sunday 24th November 2013, English Magic, closed at the British Pavilion in Venice after six months and a record breaking 374,000 visitors through the doors. Following this great success, The British Council is delighted that the exhibition will return to the UK, for the first national tour of its kind in 2014.

Beginning at the William Morris Gallery in London, the exhibition will then travel to Bristol Musem and Art Gallery and Turner Contemporary in Margate. The scale and content of the exhibition will be adapted to suit each venue and will respond the collections and contexts of the venues in which it is shown.  Jeremy stated;

‘It’s been great to be able to make new work for a building like the British Pavilion. I’m also really happy that the show will return to British shores in 2014!’

The exhibition is accompanied by a catalogue, published by the British Council, which features a new essay by Hal Foster and an interview between Jeremy Deller, Chris Dercon and John Paul Lynch.