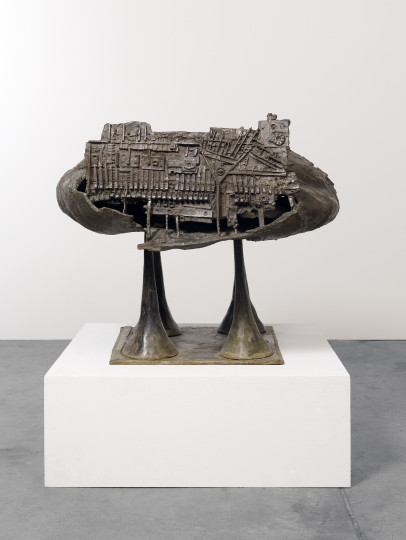 Eduardo Paolozzi (1924–2005) is perhaps best known for creating some of the earliest examples of British Pop Art, but less familiar is his work for the art and literature magazine, Ambit: work that shows a more politically engaged side to the artist than has previously been acknowledged. This exhibition presents Paolozzi’s Ambit works in the context of his other work from the late fifties to the early seventies.

Recruited to Ambit in 1967 by the magazine’s prose editor, J.G. Ballard, Paolozzi created a series of works using the magazine page as a space for collage, writing and visual essays. The artist’s works for Ambit tackle the war in Vietnam, the acceleration of technology, and the utopias of mass advertising.

As well as examples of Paolozzi’s work for Ambit, works on show include bronzes, prints, and artists’ scrapbooks, as well as a range of space age toys from the artist’s collection.

The exhibition is curated by David Brittain and Four Corners Books who published a facsimile edition of Paolozzi’s Ambit works, The Jet Age Compendium: Paolozzi At Ambit in June 2009.