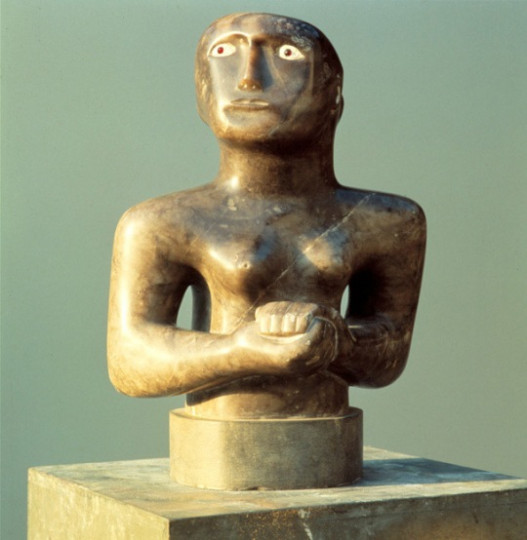 To coincide with the 40th anniversary of our founding we're proud to present Becoming Henry Moore, an exhibition charting the artist’s creative trajectory from 1914 until 1930.

Becoming Henry Moore gives an insight into the influences at play in the mind of Britain’s foremost modern sculptor during his formative years.

Focused on the ambition of becoming a sculptor, Moore spent his early years studying the art of the past and of his contemporaries on the journey to producing his own individual style. His talent was spotted at a young age at school in Castleford by a progressive headmaster, ‘Toddy’ Dawes, and an encouraging art teacher, Alice Gostick. Miss Gostick and Moore struck up an enduring friendship, and his earliest experiences of contemporary art were digested from publications at her house. After World War I Moore received an ex-serviceman’s grant to attend Leeds School of Art, and later a scholarship to study at the Royal College of Art in London.

During this period, through numerous friendships and mentors, a wealth of art in public and private collections was opened up to him. At the Royal College Moore abided by the curriculum, which focused on copying classical Western art, but spent much of his spare time exploring the ethnographic collections of the British Museum and the displays in the South Kensington museums. Thanks to a travelling scholarship in 1925, he had his first direct encounter with early Italian wall painting and sculpture, which again played an important part in his artistic development. These influences were not only critical for the development of Moore’s early style, but they continued to inform his work for the rest of his career.

Starting with experimental work from his student days in both Yorkshire and London, Becoming Henry Moore presents Moore’s work from the 1920s, shown in dialogue with artists who inspired him or worked alongside him. These include British contemporaries such as Barbara Hepworth and Leon Underwood; the European avant-gardes, Constantin Brâncuși, Henri Gaudier-Brzeska and Pablo Picasso; earlier artists such as Auguste Rodin and Michelangelo, plus examples of African, Aztec and Cycladic art from the British Museum; and publications which Moore studied as a young artist.