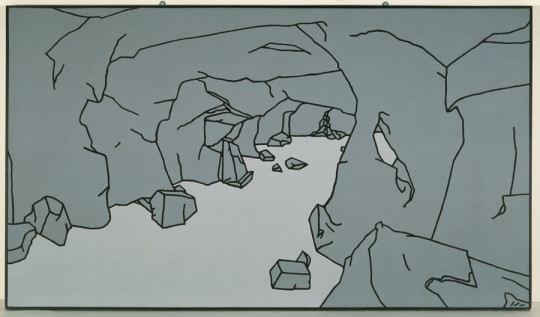 Curated in association with Professor Martin Hammer (University of Kent), this exhibition tells the story of the meeting of two movements in the 1960s, namely those of Pop Art and the ‘post-painterly’ abstraction strongly inspired by 1950s American practice.
The title A Marriage of Styles comes from one of David Hockney’s witty works, but for this exhibition serves to capture a distinct impulse in British art which was characteristic of the period either side of 1965. The provocative juxtaposition of heraldic geometric devices and figurative imagery was prefigured in the Target paintings of Jasper Johns, and elaborated in the UK in the work of Peter Blake. By the middle of the decade, we can see figurative painters such as Patrick Caulfield, David Hockney, Allen Jones, Howard Hodgkin and Pauline Boty making self-conscious reference to the formal language of their abstract contemporaries, while other artists, notably Richard Smith and Derek Boshier, were introducing into abstraction deliberate allusions to the visual strategies of current advertising and packaging.
This exhibition partners those at Studio 3 gallery on the University of Kent campus and at The Beaney House of Art and Knowledge, also in Canterbury, and contributes to the programme of cultural events and public engagement activities celebrating the University of Kent’s 50th anniversary.
For more information on the University of Kent's 50th anniversary and the celebratory exhibitions please follow the link: http://www.kent.ac.uk/50/celebrate/projects/my-generation.html