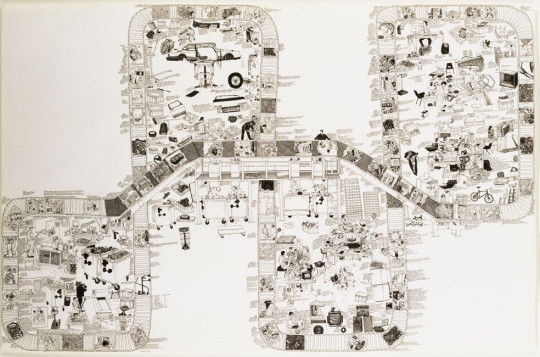 It has been nearly twenty years since Michael Landy covered all the walls, top to bottom, of City Racing Gallery with small signs, symbols and figures, highly-stylised and personalised, boldly drawn in marker pen. The twenty-year anniversary of 'Run For Your Life', 1993, is an exciting pretext to stage a retrospective of works on paper by one of the truly original - and resolute - artists of his time. Landy is also about to be celebrated at The National Gallery, London, with an exhibition, 'Saints Alive', the conclusion of his two-year residency.

Michael Landy's utterly distinctive graphic production is the foundation of his practice.  His drawings function in many different ways: as semi-autobiographical pieces, preparatory or concluding sketches for his large-scale projects and installations, as well as autonomous bodies of work.

The display of sixty-odd works on paper, in both Thomas Dane Gallery spaces, will bring together, for the very first time, at least one example of every series or project that Landy has realised in the past twenty years, in an attempt to reveal and observe his rich, playful, and dogged vision.

Landy's compositions defy classical conventions, yet they are executed with obsessive attention to minutiae, in keeping with considerations of Art Brut - or even more so, Outsider Art - and are often arranged with uncompromised determination, and a strong sense of layering, as well as a hard-edged graphic outline.

In Landy's hands, the Art of Copying becomes a trademark for joyful inventiveness and innovation. The deceptive mechanisation of his mark-making turns into a ground for muted reflection (in 'Nourishment', 2002); introspection ('Orchidectomy', 2005); scrutiny of his entourage ('Portraits', 2007-08); emotional tribute to his father ('Welcome to my World', 2004); and very often observation and astute critique of a world engulfed in self-destruction by compulsory consumerism ('Run for Your Life', 1993-2013; 'No Frills', 2008; 'Scrapheap Services', 1995; 'Closing Down Sale', 1992).

There are only three drawings in existence around his most emblematic project, 'Break Down', 2001, reunited for the first time in the show, whereas his un-realised homage to Jean Tinguely ('H2NY', 2006-07), has given birth to a larger than life opus of hundreds of works on paper, all executed from films and photographs from the Sixties, in such diverse techniques as glue, oil stick, crayon, correction fluid, bleach, wax, ink and charcoal.

From the first ideas he jotted down on empty cigarette packs or scraps of paper, to the monumental accumulation, in pencil, of all the St. Catherine Wheels he found in the National Gallery Collections, Landy has been relentless, and he is still going.