The British Council Collection is a global modern and contemporary art resource that shares work by UK Visual Artists, through international collaborative exhibitions and projects, to build connections and understanding worldwide. It is no stranger to global crises, having lived through the Second World War and many other such fragile geopolitical moments.

We feel it might have a few tricks up its sleeve with how to cope with the current situation and so, without further ado, we present 'please Calm Me Down Collection’. First up is Visual Arts Programme Manager Oriana Calman, whose selection of works we hope will help you relax morning, noon and night.

My favorite time of day is early morning when I wake up to the shadows and lines cast by brilliant sunrays bouncing off my white bedroom walls. It reminds me of 1935 (White Relief) (1935) by Ben Nicholson (1894 – 1982). An early acquisition for the Collection by one of the most influential British artists of the 20th Century, this evocative piece celebrates the simplicity of geometric forms against a sea of subtle hues made just visible by carved oil paint in wood.

For a midday break, I take a moment to sit outside and soak up some sun. I’d love to have a garden that looked like Petals (1974) by Henry Moore (1898 – 1986). The flecks of pale ochre and blush pink scattered wildly across this lithograph (a print made with a flat stone or piece of metal) remind me of lazy summers as a child. This work is part of the La Poesie portfolio. Did you know that the petals were made using a new lithography technique called diazo developed by Moore and the printmaker Stanley Jones?

Another lithograph that I love is Still Life with Indian Toy (1982) by Scottish painter and printmaker Elizabeth Blackadder (1931 –). Blackadder travelled across Southern Europe on a scholarship from the Royal Scottish Academy in the 1950s. I like to think that this work is inspired by her travels. It depicts a carefully curated assortment of weird and wonderful things delicately laid against a cool terrazzo-like backdrop. For me this evokes personal and precious memories of places visited. Blackadder was also the first woman to be elected to both the Royal Academy and Royal Scottish Academy.

As day turns to night, I like to do something fun to take my mind off the surreal times were living in, like play a boardgame or do a jigsaw. Looking at David Hockney’s (1937 – ) Man in a Museum (Or You’re in the Wrong Movie), 1962, does just the trick too! This fun and fantastical portrait of Hockney’s friend Jeff Goodman makes me think of a puzzle or optical illusion. While visiting the Pergamon Museum, Berlin, Hockney noticed Goodman standing next to a sculpture in a similar pose, and for a moment, could have sworn they were one and the same. Hockney, here, plays with the notion that art is alive and so when I look at this painting I’m not always so sure which is the “real” Jeff Goodman.

At the end of the day let’s take stock knowing that with each passing day we grow more resilient and closer to reconnecting with friends near and far when this is all over. Soon we’ll celebrate like the figures in William Roberts’s (1895 – 1980) Folk Dance (1938) in which six couples dance the night away to a lively violin and accordion. Roberts explored the mechanical qualities of modern-day life, but his work is also filled with rhythmic qualities, where he adds fluidity to geometric forms. 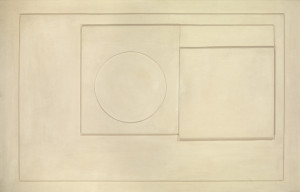