Our international curatorial delegation has been exploring galleries, artists’ studios, public art projects, an art school and even an exhibition in an old public toilet in Hull, Gateshead and Newcastle. They’ve just arrived in Manchester for the last leg of their trip.

We asked them about their reflections so far:

“I find the idea of a city of culture so interesting and it seemed very productive and helpful for the chosen city. It’s a great opportunity, especially for small cities. In Hull, we experienced an intense and special artistic and cultural ambience.

In Argentina we do not have this programme, but we have similar projects such as a "week of culture" in some cities, but not as a national programme. I’m taking this programme and other lots of ideas back home. It is very interesting to experience a smaller city’s enthusiasm around cultural development. It's a great example of how a community can change and experience a great development through a cultural policy decision.”

“The city of culture is a good idea as it contributes to the local cultural development and it can bring dynamic local elements into the international or national contemporary art scene.

In Hull, the large number of local audiences attending the Turner Prize exhibition interests me. All of the organisers did a great job. The idea of a contemporary art show in a gallery with popular collection of traditional art contributes to this. Hull has also done well with social engagement by having interesting art events in the local library.

In Newcastle, the alternative spaces run by artists inspired me. Not only the independent artists or curators, but also the BALTIC tried their best to support non-profit projects.

Some of the ideas above could be done very well in my home country. The idea of a rural region or village of culture could be more popular in China."

“I like the idea of a cultural city. It is a way of making everyone benefit from the foundations of the cultural and artistic development of a country. It also allows local artists to express themselves and to be discovered by others. It is a great initiative to give a new boost to domestic tourism but also sell the city as a destination.

I had never been to Hull before, but I could feel this breakthrough in its artistic life and cultural effervescence through the commitment of its population, especially the volunteers. What inspired me most in Hull was the Hull School of Art & Design, a great place to learn about art.

The City of Culture concept almost existed in our country. In 2004, President Abdoulaye Wade initiated this kind of project starting with the region of Thiès, which was to host the 44th celebration of our independence. The city had welcomed artists from all over with very rich programming. He had decided to choose a cultural region every year. Unfortunately Thiès was the first and last, and there was never any follow-up.

During our visits to other cities, Newcastle, Gateshead and Manchester, I liked the fact that artists had come together to form collectives by deciding to share studios.” 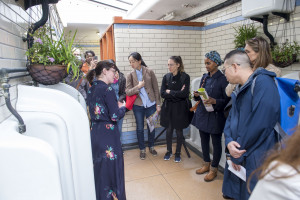