In Search of Lost Time is an exhibition that explores the complex relationship between image, speed and time in the Gulf, questioning the chronological and territorial notion of the region and the paradigms of its underlying identity.

The accelerated pace of growth over the last sixty years has led to monumental shifts in the economic, physical and socio-political environment of the Gulf. This incredible speed of change has created rifts and tensions between an existing desert culture and rising global capitals; tradition and technology that increasingly define the Gulf states.

In Search of Lost Time presents work by 13 artists who seek to reframe conventional interpretations of time in the Gulf. Employing the strategies of archivists, time-travellers, explorers and storytellers, the artists seek out and develop temporal strategies of representation, utilising video, photography, performance, sculpture and painting as mediums of expression to revive residues of the past and propose unexpected alignments across time periods that also reveal the time-bending properties of technology. Additionally, a rotating exhibition within the exhibition, Gharem Studio, Riyadh presents work by emerging artists under 25 that are creating shifts in the way that art, video and social critique are made and proliferated in the Gulf.

The works in In Search of Lost Time vibrate between temporal modes, of past, present, future and in between. Constructing perspectives on the region that are fragmented, disjunctive, or recursive in nature, or that reclaim and reengage with histories, present experiences and aspirations for the future. 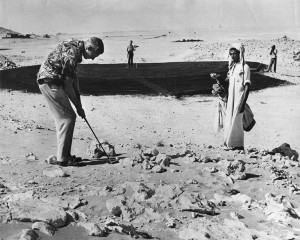