Whist practicing social distancing, you’ll no doubt be coming up with ways to get your Visual Arts fix. From exploring online collections and virtual galleries, to informative social media threads, we’ve asked some of our British Council Visual Arts team members to list their recommendations…

I’ve been thinking a lot about self-care rituals lately. I don’t know about you, but it’s starting to feel like Groundhog Day, you know, re-living the same day every day (except sadly without Bill Murray)!? So, while the world collectively hibernates it’s important to find your (remote) community. Check out the wrong, a space for contemporary digital art where you can share 15 minutes of togetherness with Distant Feelings an online participatory and contemplative performance series. You can’t go wrong with the wrong! And if sleep is a bit tough right now, I find Julian Opie’s series Winter (2012) in the British Council Collection really calming.

I think it’s also important not to forget all those seminal projects that made use of our screens pre-isolation. For example, I always look forward to 12ø Collective’s annual #30works30days project, where artists submit a new piece of work to be shared online every day in April, failing to submit means they're out of the project. And of course browsing works created during the 90s Net Art movement – see for example Heath Bunting’s Kings Cross Phone-In, 1994, a web page listing the phone numbers for pay phones in London’s King’s Cross Station (now probably obsolete!) along with a date and time for people to call, which led to a flash-telephone mob.

A work in the Collection I’m thinking about a lot at the moment is Suki Dhanda’s Untitled, currently on view in our digital exhibition Almost There, curated by curators from Turkey, Ukraine and Georgia. Although taken in a very different context, the photograph depicts a woman looking out of the window - a configuration that obviously, globally, resonates hard in these times.

For me, I find that I can really appreciate a work of art a lot more, if I understand the skills and technique required to produce it. And so it has been great to rediscover the short films available on BBC Arts which highlight the making process and techniques, synonymous with certain regions. In particular, the short films from the Handmade in Japan series focusing on the famous Japanese family of potters, the Hamadas. Not only does this give a greater insight into the making process but I can also rediscover and see works in our collection with different eyes, in this case the works of Bernard Leach who worked at the Hamada pottery.

While we are still able to go out once a day, I escape to Greenwich Park at the end of the day, and in five minutes I’m standing in front of Henry Moore’s Standing Figure: Knife Edge, a 3.6 metre tall sculpture situated in natural surroundings at the highest point in the Park and open to all. Conceived in 1961, the work was cast in 1976 in an edition of 8 (6 plus 2 artist's copies, finding their way to collections in Norway, Switzerland, Japan and the USA).  This sculpture is one of the artist copies (LH 482a cast 00) loaned by the Henry Moore Foundation at the time of the London 2012 Olympic and Paralympic Games, and after a campaign (Battle to return Parks Moore Bronze), restored to its original plinth where it stood from 1979 to 2007 before being toured around the world by the Foundation.  Let’s hope this is its final resting place as I can’t imagine it anywhere else.

Staring majestically towards the river Thames, and Canary Wharf in the distance, I like to think this is a latter-day Giraldilla resolutely facing the future although with perhaps a better fate. The work is best seen late afternoon as the last glinting rays of sunlight catch the bronze and green patina and the impressions of the hand marks and striations of the artist on its surface, creating long shadows stretching into the distance.

We are all on a ‘Knife Edge’ at the moment and this work reminds us that where there is art there is hope. 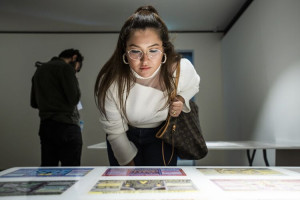 How to get your Visual Arts Fix © Poyraz Tutuncu