Grayson Perry’s exhibition of tapestries, The Vanity of Small Differences, was seen by over 27,000 visitors during its 6-week run, from 7 April–21 May, at the Museum of Contemporary Art Vojvodina in Novi Sad, Serbia. Well-known cultural figures from Serbia led very popular tours of the exhibition including playwright Biljana Srbljanovic and actor Uros Djuric, and many people attended The Night of Musuems event (pictured) on the final weekend of the exhibition. Over 200,000 people watched Perry’s documentary All in the Best Possible Taste on the Serbian national broadcaster RTS.

Following successful exhibitions in Ukraine and Serbia, The Vanity of Small Differences continues its Wider Europe tour and opened at the National Gallery in Pristina, Kosovo on 1 June, where the exhibition continues until 30 June 2017.

Find out more about the British Council in Serbia

Find out more about the British Council in Kosovo 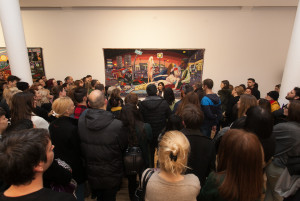