Last week, the British Council Visual Arts team welcomed six curators from Saudi Arabia who were selected to take part in a professional development programme. The British Council’s Contemporary Collective programme for women aims to support the next generation of curators and cultural pioneers in Saudi Arabia to realise their potential, and to encourage more cultural connections and exchanges between the UK and Saudi Arabia.

The six chosen curators were given a tour of the British Council Collection and then went on to visit galleries and museums across London, including Barbican Art Gallery, Bold Tendencies, The Foundling Museum, Tate, South London Gallery and the Serpentine Galleries. You can follow #ksacurates to see updates from the curators on Twitter and Instagram.

Maryam Hamed Hussain, one of the participants of Contemporary Collective, said:

"In short, it’s been invaluable. We have had the opportunity to speak directly with various leading individuals whom influence the art scene both locally here in London, but also play a key role in the international arena. We've gained insight on how non-profit organisation such as Bold Tendencies, and even young collectives such as Tate Collective, have a direct impact on engaging young and/or underprivileged communities, thus engaging a broader sector of the public.

We have also been able to understand how acquisitions occur for British and international artists, which has inevitably cemented a level of success for the artists, but more importantly contributed to the greater good of art and culture as a whole. We've seen mind-blowing, emotionally evoking, and truly inspiring artwork that have left us speechless, but to add to it, an invaluable insight to how these artists work by curators who have generously spoken to us at length - Melanie Unwin, New Dawn, by Mary Branson at the Houses of Parliament and Louise Bourgeois' Artist Room at Tate Modern with the Curator of Middle Eastern acquisitions, Vassilis Oikonomopoulos, to name a few. Ethics of Dust was an inspiring project by Artangel introduced by their co-director Micahel Morris."

The curators are also participating in the 'Creating Contemporary Art Exhibitions' section of the International Museum Academy in London, which is organised by the British Council’s Cultural Skills Unit. In addition to their trip to the UK, the Contemporary Collective programme involves 8 course modules, 6 case studies/master-classes, a 2-week internship in London and a 6-day visit to art spaces in the UAE. 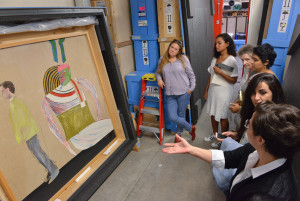