Mussulman, a film by artist Hetain Patel was available here for a limited two-week run.

CABLE CLUB is a series of artist films from the British Council Collection. Each month, from June – August 2020, a film was be posted on our website ready for audiences to enjoy around the world.

Born in Bolton, UK, Hetain Patel’s art practice spans a range of media, including photography, sculpture, digital drawing, video and performance. He has recently been selected for the British Art Show 9 – the biggest touring exhibition of contemporary art in the UK – and has a popular YouTube channel. There are two of his works in the British Council Collection – Mussulman, which Hetain has kindly agreed for us to show above, and also Don’t Look at the Finger the trailer of which you can view here.

Mussulman presents the artist tracing fibrous muscular tissue in henna onto his bare upper body, looking down to guide his hand or sometimes glancing up to the camera itself.

Originally a silent time-lapse video commissioned in 2006 by Angel Row Gallery in Nottingham, UK, Mussulman was later updated by Patel in 2018 to include music performed live at the UK-organisation Rich Mix arranged by the composer Amy May and featuring the voice of his mother, Leela Patel.

Hetain’s use of henna references celebratory body art and points towards ideas of ritual and how traditions are often transmitted through the repetitive acts enacted by our bodies, or those of the people around us.

Hetain’s mother can be heard within the musical score singing over his mark-marking in Gujarati, and in many of his other works Hetain engages with family members, see for example The Jump (2015), filmed with 17 family members in his grandmother’s house.

Patel is particularly interested in how our identities are formed. The impermanence of henna could make reference to the fact that while familial rituals can go some way into shaping our identities, they fluctuate in their impact and live side-by-side with popular culture, daily life and the professional environments we find ourselves in.

You can read an interview between Hetain and the curator Paul Goodwin on Hetain’s website here and a recent interview with online journal Studio International here.

CABLE CLUB ran from June 2020 until August 2020. It’s named CABLE CLUB as a nod to the undersea internet cables that power the majority of our modern internet traffic and fuel the online display of these moving image works.

Fancy more moving image? Check out the British Council Film Archive, a rights-free collection of over a 100 short documentaries made during the 1940s, and WE ARE HERE – a series of five artists’ film programmes co-curated by Tendai John Mutambu and British Council in collaboration with LUX, an international arts agency that supports and promotes artists’ moving image practices. 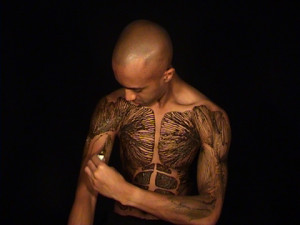