CABLE CLUB is a series of artist films from the British Council Collection. Each month, from June – August 2020, a film will be posted on our website ready for audiences to enjoy around the world.

You can still view the Nyau Cinema series on YouTube.

Nyau cinema approaches film as a sovereign activity. Making film becomes a way of escaping the limitations and conventions of everyday life, where the self is playfully re-conceived as part a larger scheme of things. Nyau is a Chewa word for excess.

1. Nyau film must be conceived as a clip no longer than a minute.

2. Performance should be spontaneous and site/specific to found architecture, landscape, or object.

3. There must always be a conversation between performance and the medium of film.

5. Costume must be from everyday life.

6. Acting must be subtle but otherworldly, transgressive, and playful.

7. Editing must be limited to the aesthetics of primitive film and silent cinema.

8. Audio must be used sparingly, otherwise it must be performed live at film screenings.

9. Screening of a Nyau film must be in specially designed cinema booths or improvised cinema installations that compliment the spirit of the film.

Samson Kambalu is a Malawi-born Oxford-based artist and Associate Professor of Fine Art at Ruskin College and fellow at Magdalen College, Oxford University. He works with different types of media including site-specific installation, video, performance and literature.

He kindly agreed for these video works to be screened on our website for a limited run.

All four works are part of Kambalu’s series of Nyau Cinema – short, site-specific performance videos that engage with Situationist ideas, the Nyau philosophy of the Chewa tribe in Malawi for whom performance is a key part of life, and Kambalu’s memories of watching films as a child.

The films document improvised, playful and slapstick actions performed by Kambalu in public places to encourage new, critical – but also humorous – ways to look at the world.

The artist actively encourages online sharing of his work and has commented that the GIF-like quality of the Nyau Cinema films has led to them being hosted on Vine, Twitter and Instagram.

Cathedral, Superfly, I Take My Place in History and I Take The Stairs To 1952 are part of WE ARE HERE: Artists' Moving Image from the British Council Collection and LUX. WE ARE HERE is a programme of artists’ film, curated by Tendai John Mutambu, that has been seen in cities around the world – including Shymkent, Kazakhstan; Jakarta, Indonesia and São Paulo, Brazil.

Now in its second year, in response to the global Covid-19 crisis, we are pleased to offer partners the opportunity to take part in WE ARE HERE by sharing the best of contemporary moving image with audiences through online screening events. Interested? Find out more here and get in contact via visual.arts@britishcouncil.org.

CABLE CLUB will run from June 2020. It’s named CABLE CLUB as a nod to the undersea internet cables that power the majority of our modern internet traffic and fuel the online display of these moving image works.

Fancy more moving image? Check out the British Council Film Archive, a rights-free collection of over a 100 short documentaries made during the 1940s. 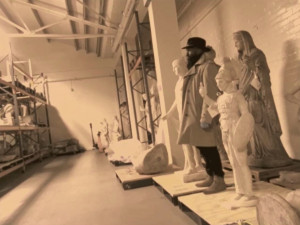