Join British Council in partnership with ICOM UK and Museums Association for a new series of live online conversations for leading museum and gallery professionals in the UK and around the world to connect and share experiences in the current context of Covid-19.

This session is for museum and gallery professionals.

Leading Digital at a Time of Uncertainty Webinar

We are pleased to start our series with a session titled "Leading Digital at a time of Uncertainty". This event is hosted by Professor Ross Parry, Deputy Head of School & Professor of Museum Technology at the University of Leicester, who will be in conversation with Nikita Yingqian Cai, Chief Curator, Times Museum in Guangzhou, Niall Kerr, Making the Future Programme Manager at the Nerve Centre, Northern Ireland and Irini Papadimitriou Creative Director of Future Everything.

This discussion will be followed by an audience Q&A.

Together, the panellists will explore the following:

"It’s time to recognise that digital change in museums is about supporting people and not just mastering technology.

Leading digital adoption and transformation in museums has always required taking a holistic and contextual view of the organisation and its specific needs.

And so now, amidst a pandemic, with individuals and institutions both feeling uncertain, how might we locate new skills of empathetic and equitable leadership?"

This session will have Closed Captioning and a British Sign Language interpreter. The session will also be recorded and a full transcript available following the event.

Professor Ross Parry is Deputy Head of School & Professor of Museum Technology, University of Leicester, UK. A Principal Fellow of the Higher Education Academy, former Tate Research Fellow, and former chair of the UK’s national Museums Computer Group, Ross is also one of the founding Trustees of the Jodi Mattes Trust - for accessible digital culture. In 2018 he was listed in the Education Foundation’s ‘EdTech50’ – the fifty most influential people in the UK education and technology sectors. Ross leads the ‘One by One’ international consortium of museums, professional bodies, government agencies, commercial partners and academics, that together are working to build digitally confident museums. After a three-year national project in the UK (working with the Museums Association, Arts Council and National Lottery Heritage Fund), the consortium’s latest project (‘structuring museums to deliver new digital experiences’) now brings partners including the V&A, Science Museum and the UK’s Museums Computer Group into an action research collaboration with the Smithsonian Institution, American Alliance of Museums and Museum Computer Network.

Nikita Yingqian Cai, Chief Curator of Guangdong Times Museum, is now contributing to the programmes of Times Art Center Berlin in conversation with the transnational projects she develops in Guangzhou. She initiated “All the Way South” research network in 2016 and recently launched a digital journal under the same theme. She is currently working on research to map out utopian imageries and narratives that challenge the geo-political ideology of north and south, which covers a broad spectrum of border-crossing topics. She has curated exhibitions such as Roman Ondák: Storyboard (2015), Big Tail Elephants: One Hour, No Room, Five Shows (2016) , Pan Yuliang: A Journey to Silence (Villa Vassilieff in Paris and Guangdong Times Museum, 2017), Omer Fast: The Invisible Hand (2018) and Neither Black/Red/Yellow Nor Woman (Times Art Center Belin, 2019). Her writings have appeared in several publications and magazines, and she is the awardee of the Asian Cultural Council Fellowship in 2019.

Niall Kerr is a Project Manager with the Nerve Centre, Northern Ireland’s leading creative media arts centre. He manages Making the Future - an EU funded project delivered in partnership with National Museums NI, the Public Record Office of Northern Ireland and Linen Hall Library. Making the Future uses objects, collections and archives as a stimulus to pose challenging questions about the past, take the temperature of where we are and project ideas for our future. The project regularly uses digital creativity to engage audiences and offer opportunities for their voices to be heard. Niall has previous experience in event management, marketing, journalism and digital media projects.

Irini Papadimitriou is a curator and cultural manager, whose practice draws on interdisciplinary and critical discourse to explore the impact of technology in society and culture and the role of art in helping us engage with contemporary issues. Currently Creative Director at Future Everything, an innovation lab and arts organisation in Manchester, she was previously Digital Programmes Manager at the V&A and Head of New Media Arts Development at Watermans. Her display, Artificially Intelligent, was exhibited at the V&A in 2018. Irini has been a co-curator for the Arts & Culture experience at Mozilla Festival and she is co-founder of Maker Assembly, a critical gathering about maker culture. She is an Imperial War Museum Institute Associate, an Industry Advisory Group member for SODA (School of Digital Arts) at Manchester Metropolitan University, and an Advisory Board member for ONX Studio, a new major collaboration between Onassis USA and New Museum’s cultural incubator NEW INC. Irini has been a recipient of curatorial research programmes including MOBIUS (Finnish Institute), Art Fund Jonathan Ruffer, Mondriaan Fonds and British Council, and has served as a jury member for Ars Electronica, Lumen Prize, Vertigo STARTS and ACM Siggraph. 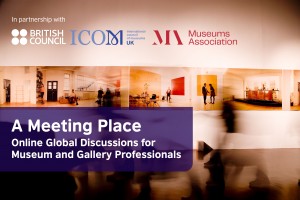