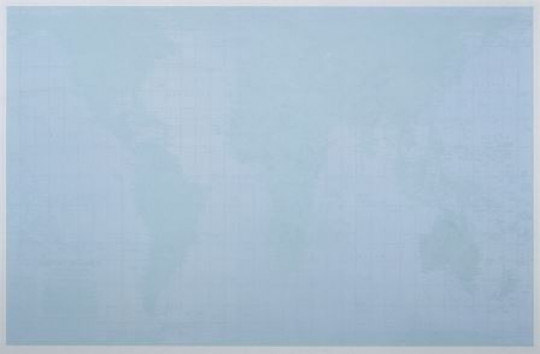 Born in 1965 and trained at Glasgow School of Art, Hopkins is part of the generation of Scottish artists that includes Christine Borland, Simon Starling and Clare Barclay, and first came to prominence with an exhibition at Tramway Project Room in 1996. That exhibition included a sequence of paintings on furnishing fabric, a support with which the artist is still working, and on which she has made some of the newest work in this current exhibition.

The paintings chart a quest for an appropriate indexical procedure, for the right mark to make. Using only what is there, the artist retraces some of the motifs present in the fabric, subtly altering and redirecting the original, rendering the impersonal, machine-made designs oddly and intimately compelling, both in the areas on which she has worked and in those she has left untouched. The surface of the fabric becomes charged by her activity, spread out across it and across time with slow deliberation.

The social aspect of the information contained within the furnishing fabric is not lost on the artist. Part of the appeal of working on supports with pre-existing marks lies in the process of coming to terms with what those marks originally meant and what they may mean once the artist has tackled them. Furnishing fabric brings with it a particular set of baggage, to do with social aspiration, class and the desire for individual expression through the choice of paradoxically non-individualised interior design.

Hopkins’ paintings seek to control and redirect the flow of that more nebulous information as much as the simply graphic data contained in the elaborately floral designs. In this exhibition, Hopkins’s early furniture fabric paintings are shown together with more recent work on blank crumpled paper, the innocent blandness of this support highlighting the importance of choice and the absence of neutrality in every aspect of the painter’s practice.

Hopkins’s work is often beautiful. It presents itself first and foremost as a sensuous, painterly practice, to be savoured slowly and appreciated for its skill and care. However, the primary impulse behind the artist’s activity is rarely one of embellishment, but is more often harsh and disruptive; a drive to disorientate both the system of information on which her gaze falls and the viewer’s response to it. This is eloquently evident in the works Hopkins has made with sheet music. Early treatments involved the artist carefully obliterating all the black marks on the music – notes and words – with glossy white gouache, making an elegant, ghostly echo of the original. More recently, she has blacked out particular elements of the music, or physically scratched them out, the extent to which she is concerned with obliteration and erasure more apparent, the savagery of this impulse not far beneath the now much less conventionally beautiful surface.

The blankness of Hopkins’s song sheets leave space for their remembered or imagined music to reverberate in the imagination of the viewer who, particularly in the later work, is free to insert whatever melodies they chose in the gaps opened up by the artist. This is less true of other work, in which the artist seems determined completely to destroy rather than simply to redirect or divert an original relationship to meaning. Several paintings in the exhibition began life as maps, their relationship to perceived geographical truth unequivocal and universally accepted.

Uninterested in them as maps – that is, unconcerned with the imaginative relationship they initiate with the places they chart – Hopkins works with them as purveyors of information, sometimes wiping out all the land, sometimes reproducing all the land on top of all the sea, generally working out what kind of new relationship she can forge between the marks on the paper and the meaning they may or may not convey.

This exhibition brings together work from 1996 to 2005, allowing new work to be seen against existing work and providing a context in which to assess the development of Louise Hopkins’s highly individual painting process. In its consistent variety, hers is a practice which engages as it repels, revealing the process of making marks on a surface to be as much about defacement as it is about decoration.