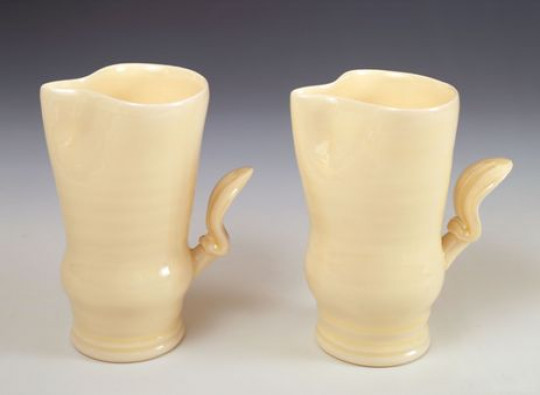 Takeshi Yasuda was born in Tokyo. His initial interests were in engineering and industrial design but he later became interested in pottery after a visit to Mashiko, becoming an apprentice there in 1963 at the Desai-Gama Pottery, and where he later established his own workshop in 1966. Yasuda moved to the UK in 1973 and set up a workshop in Hampshire, moving later to Devon and Bath. He has held a number of teaching positions and was Professor of Applied Arts at the University of Ulster. His work can be seen in many national collections worldwide. Yasuda’s work is thrown and has a tactile quality that retains the soft malleable nature of the clay and is a fresh interpretation of creamware. His work has sensitivity unique to Oriental ceramics, and Yasuda draws on this to produce pieces that are not just concerned with design or functionality but with the way a pot can generate and be part of ritual. His palette is puritan in colour and the fluid shapes are decorated with softly dented surfaces and occasional slip trailing which offers unlimited tactile sensation. The mixture of control and ease, the casual and formal make Yasuda’s work so appealing.