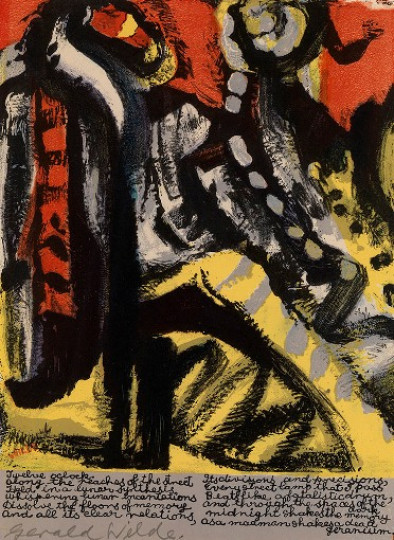 Born in London, Wilde worked first in a solicitor’s office before taking up a place at Chelsea School of Art, where he was taught by Graham Sutherland and Henry Moore. He was marked out early as an original talent, and was commissioned to produce textile designs, alongside Matisse, Derain, Sutherland and Piper, for Zika Ascher in 1946 (Designs for Textiles by Twelve Fine Artists). He served in the Pioneer Corps during the Second World War, and much of his expressive, instinctual work was lost during the blitz, perhaps accounting for his slipping from visibility after the war. Original, unaccountable, and undisciplined, he gravitated towards the hard-drinking Soho set centred around Tambimuttu after the war. Tambimuttu’s influential magazine, Poetry London, published work by many of the decade’s greatest writers, among them Lawrence Durell, Elizabeth Smart, Vladimir Nabokov and Henry Miller. The lithograph in the British Council Collection was one of three lithographs commissioned by Poetry London 10 (1944) to illustrate T. S. Eliot’s ‘ Rhapsody on a Windy Night’. The character of Gulley Jimson, in Joyce Cary’s novel, A Horse’s Mouth (1944) is widely acknowledged to be a portrait of Gerald Wilde.