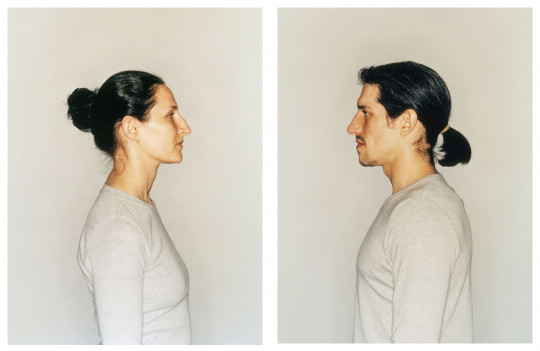 Bettina von Zwehl was born in Munich in 1971 and received an MA from the Royal College of Art in 1999.
Her photographic portraiture has a minimal quality and each series focuses on a single, simple construct. The sitters will assume a uniform pose, wear an identical item of clothing or be photographed at a particular moment, i.e just moments after they have woken up. The artist’s arrangement of these images draws out inherent similarities but also starkly highlights the striking individuality of the sitter’s faces.
Her work has been exhibited in a number of galleries in Europe and the USA. In 2002, von Zwehl participated in the exhibition Reality Check: Recent Developments in British Photography and Video that was jointly organized by the British Council and The Photographers’ Gallery, London. Her series Alina was exhibited at The Photographers’ Gallery, London in 2005. Her work was included in Photography 2005 at Victoria Miro Gallery, London and has been shown at Lombard-Freid Fine Arts, New York and Galleria Laura Pecci, Milan.
Her work is included in many public collections including The Solomon R. Guggenheim Museum, New York and Victoria and Albert Museum, London.
The artist lives and works in London.