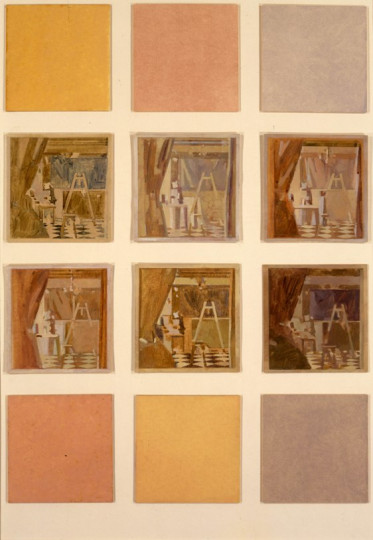 Michael Upton was born in Birmingham in 1938 and studied painting at the Royal College of Art, where his contemporaries included David Hockney. During his time at the RCA he was awarded a Leverhulme Scholarship and later went to study in Rome.
He divided his activities between performance work and paintings, considering the two practices intimately connected. For most of his performance work Upton collaborated with artist Peter Lloyd-Jones, a partnership that manifested as a developing series of actions and installations throughout the 70s and 80s. He referred to his paintings as ‘domestic’ using a muted palette of four colours and concentrating on nostalgic images from his immediate environment.
During his life he exhibited in the RA Summer Exhibition and the Royal West of England Academy, Bristol. His solo shows included Yale Center for British Art (1987), the Anthony Ralph Gallery, New York (1987), and at Anne Berthoud and Cassian de Vere Cole's galleries in London. He also taught at the Royal Academy of Art before retiring to Cornwall due it severe ill health.
He died in 2002 aged 64 and a posthumous exhibition of his paintings took place at The Henry Peacock Gallery in 2004.