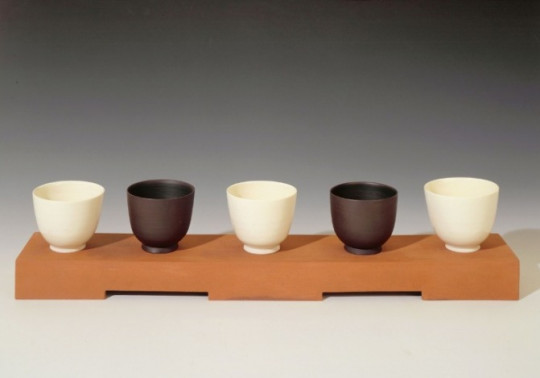 Julian Stair was born in 1955 in Bristol, England.. He studied ceramics at Camberwell School of Arts and Crafts from 1974-1978 and at the Royal College of Art from 1978-1981. His early pots were domestic in scale and use, tea and coffee wares, often in sets, in matte unglazed stoneware with subdued colours and minimal decoration. This sophisticated Modernist take on everyday ceramics has been replaced by more dramatic, larger and archaic-looking works.

He kept this choice of clay body and colours in later works based on funerary artefacts, sarcophagi and funerary jars, but extended his scale, using industrial kilns to fire works up to 5 feet long for Extended Inhumation (2004-5). He sees these pieces as a natural extension of his domestic wares:
Like pots sustaining the body in life through the containment of food and drink, this funerary ware contains the body in death and underlines the profoundly somatic characteristics of pottery.

Stair is also interested in theory of ceramics production and consumption. He returned to the RCA as a student and completed a theoretical PhD entitled 'Critical Writing on English Studio Pottery 1910-1940' in 2002

He has exhibited internationally for over 25 years. His work can be seen in public collections including the Victoria & Albert Museum, London, the American Museum of Art & Design and Hong Kong Museum of Art

Julian Stair was elected a Fellow of the Royal Society of Arts in and was a Trustee of the Crafts Council (2000-2008) and Trustee for Contemporary Applied Arts, London (1997-2003).