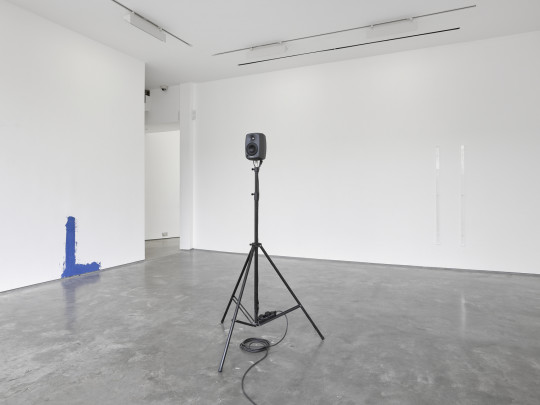 Cally Spooner (born Ascot; 1983) is a writer and artist. Using voices from philosophy, pop music, current affairs to write, and casts of characters to perform, Spooner produces disjunctive scripts, looping monologues and musical arrangements to make visible the automation of speech. Spooner appropriates different performance genres such as the Broadway musical, the television commercial and the radio play to consider how unmediated performance, can sit within mediated entertainment and today’s competing demands on attention.

In And as the Medieval Cloisters Connect Seamlessly to the Corridors of Power, I’m Quietly Confident (U-Turn), a single speaker on a stand plays an audio piece comprising of five acapella voices. Hesitations and affirmations such as ‘er’ and ‘um’ are performed by actors and merge to become a choreographed harmony of voices. In the background the artist can be heard reading a transcript of former UK Secretary of Education Michael Gove’s parliamentary speech in which he had to make a public u-turn on proposed educational policy. Isolating the hesitations in public speaking brings to the fore the contrast between fluency and faltering, success and failure.