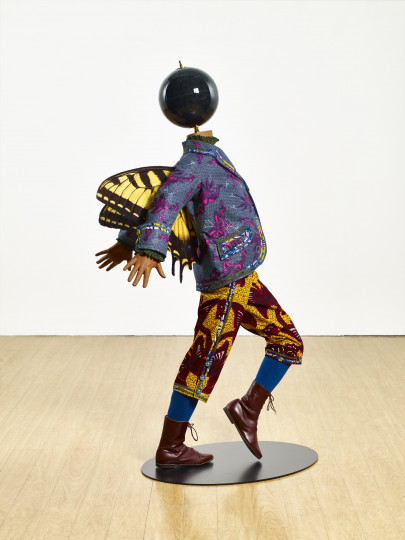 Yinka Shonibare CBE (RA) (born London; 1962) studied at Byam Shaw School of Art (now Central Saint Martins, University of Arts London)  and Goldsmiths College (now Goldsmiths, University of London). Over the past decade, Shonibare has become well known for his exploration of colonialism and post-colonialism within the contemporary context of globalisation. Having grown up between London and Lagos, Shonibare explores cultural identity through the media of painting, sculpture, photography and, more recently, film and performance. Using this wide range of media, Shonibare examines in particular the interrelationship between Africa and Europe and their respective economic and political histories. Shonibare was a Turner prize nominee in 2004.

Butterfly Kid (boy) II is from the body of work Rage of the Ballet Gods in which, Shonibare contemplates the changing state of the Earth’s climate and the human instinct for survival in the face of the extreme weather experienced worldwide. In this context, Butterfly Kid (boy) II has sprouted wings, metamorphosing to fly away and escape the apocalypse, serving as a humorous yet prophetic warning that we may need to seek new ground should the Earth become inhabitable.[1] His clothes are made of Shonibare’s signature Dutch wax fabric and his head a Victorian-style globe.