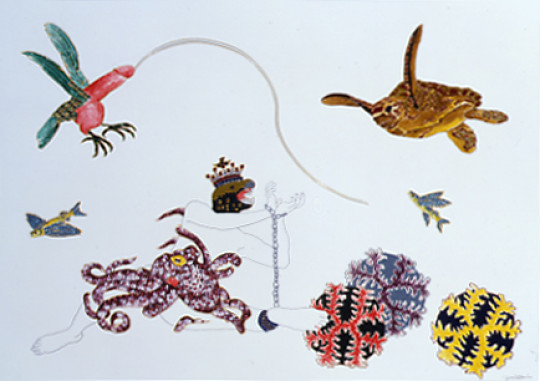 Raqib Shaw was born in Calcutta to Muslim parents in 1974. He grew up in Kashmir, a historically Buddhist territory, where he was educated by Hindu teachers at a Christian school. Citing an affinity with English literature (Wordsworth, Coleridge, the Brontes, Wilde, Hardy are named favourites), he left India in 1998 for London, to study or both his BA and MA at Central St Martins School of Art. One of the college’s great advantages for Shaw was its proximity to National Gallery, where he spent time looking at the old Master paintings, before taking those images back to the studio to digest. Besides acquiring a taste for Renaissance painting, his family background in trading meant that from an early age Shaw has been absorbing a profusion of visual stimuli, collectively informing his distinct aesthetic - what Homi K. Bhabha describes as a ‘bricolage of artistic traditions and individual styles.[1] Shaw has a large private collection of his own of nineteenth century porcelain, and Asiatic and Arabic décor, from Persian rugs and jewelry to Japanese woodcuts and kimono designs, all have their place in the ‘bricolage’, alongside contemporary references from medical journals, newspapers, pornography and television nature documentaries. Another key source of inspiration in London’s Natural History Museum, where Shaw trawls through the collections, researching the peculiarities of flora and fauna in order to invest his fantastical paintings with a certain accuracy.

He lives and works in his studio in Islington, North London, which is decorated with mirrors, fabrics and ornaments, 5000 artificial butterflies and 8000 artificial birds. Most importantly, the studio is filled with fresh flowers, varying in accordance with the seasons, and blooming and decaying around him as he works. His surroundings reflect his engagement with status as self-elected exile in London: with his native country taking on imaginary proportions, the studio’s forest of flowers summons up a peculiar version of the Himalayas.