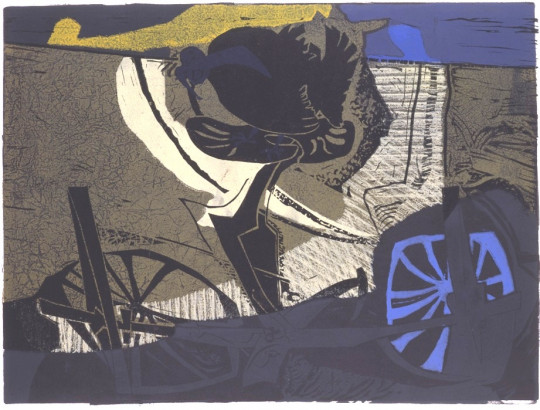 Michael Rothenstein was born in London and studied at Central School of Arts and Crafts. His studies were interrupted by illness, myzoedema, which induced a lengthy melancholia. Fully recovered he moved to Essex in 1940 and where his subject matter became the landscape, farms, farm animals and machinery around him. Rothenstein made his first print, a lithograph of 1946, for the first series of School Prints (www.merivaleeditions.com/schoolprints) published in the immediate post-war period to provide original prints for schools. He made further lithographs during the period 1948-53 including works for the Miller’s Press in Lewes, Sussex. He executed a large group of monotypes between 1948 and 1950 and, following a series of short visits to S W Hayter’s Atelier 17 in Paris, began making colour etchings in 1952. From this time onwards printmaking became his main field of activity and a prolific output of colour linocuts, woodcuts. Screenprints and mixed media prints followed over the next four decades. His major contribution to printmaking was the development of the relief print using found objects and materials, a subject on which he wrote three books.